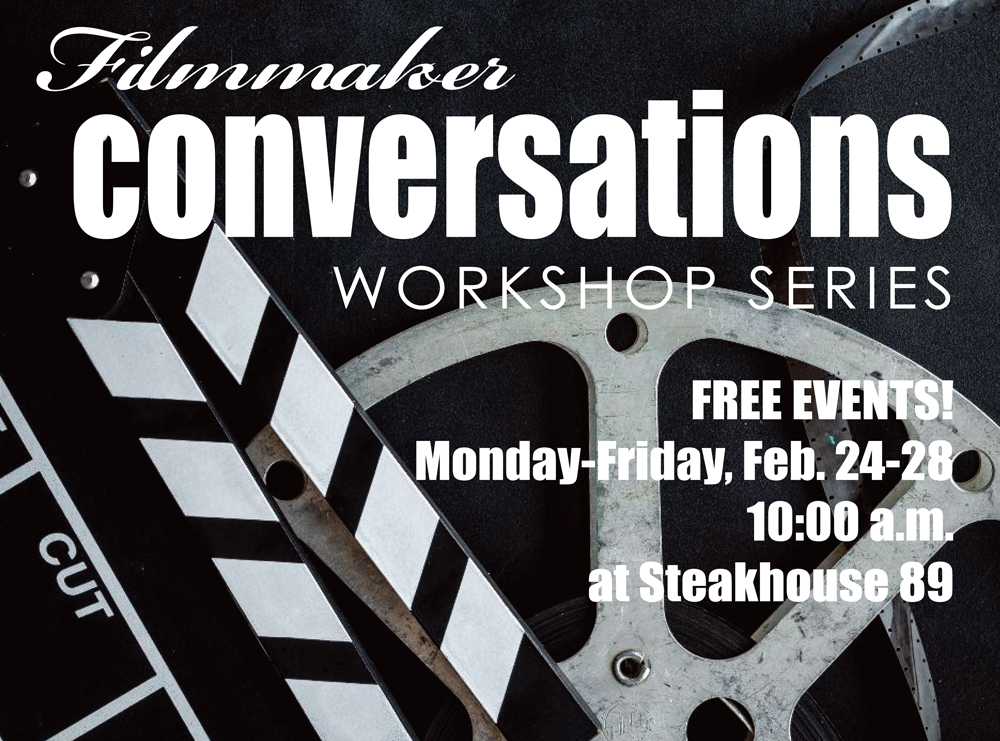 Our popular “Filmmaker Conversations” Workshop Series returns to Steakhouse 89. Each is designed to give attendees insight into the various aspects of filmmaking. Workshops and discussions are presented by industry experts with vast knowledge and personal experience in the featured subject. Topics covered will be: Screenwriting: From Page to Pitch; Getting Started: Producing a Short Film; Let’s Get Into It: Producing, Directing and the Business of Film; The Execution of Vision: Creating a Short Documentary; and Start Me Up: Music, Film and Content. 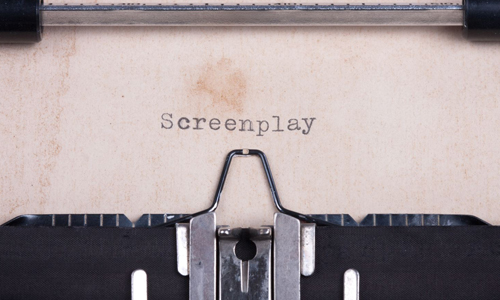 Screenwriting: From Page to Pitch

Whether it’s a Hollywood blockbuster, a documentary, or a short film, it all begins with the story. From concept to pitch, to finished script, we will discuss what goes in to getting your story green lit. Studio or independent: What is best for your screenplay? Join Leslie Dixon for an enlightening, informative and entertaining conversation and will cover what it takes to get your idea from concept to page to screen. Come with questions and leave with ammunition for your screenwriting arsenal! 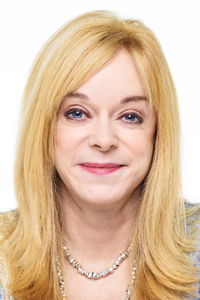 Leslie Dixon was raised in San Francisco by loving and delightful parents. An only child, her ego was stoked by all the attention, and she was encouraged, from an early age, to be a writer. Her love of movies led her to move to Los Angeles, where she knew no one, to try to break into the film business.

Within two years she had sold her first script and was now a working screenwriter. All her films have been major studio productions; her first was the comedy “Outrageous Fortune”, starring Bette Midler and Shelley Long. The movie’s critical and commercial success jump-started Leslie’s career. Other credits include “Overboard”, with Goldie Hawn and Kurt Russell, “Mrs. Doubfire” with Robin Williams, “The Thomas Crown Affair”, with Pierce Brosnan and Rene Russo, “Freaky Friday” with Jamie Lee Curtis and Lindsay Lohan, the musical “Hairspray”, with just about everybody, and “Limitless”, with Bradley Cooper and Robert De Niro.

After many years in Los Angeles, a writing job at Pixar opened her eyes to the charms of living in Berkeley, where she now resides with her husband, documentary filmmaker Tom Ropelewski. 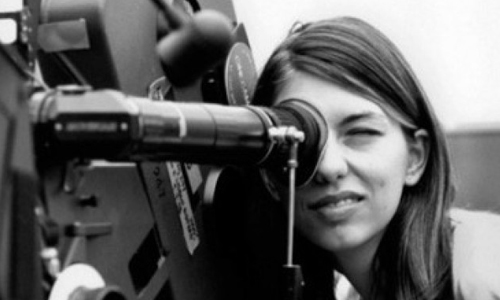 Getting Started: Producing a Short Film

Using their award-winning short films, Rebecca Shapiro and Lea-Beth Shapiro guide you through the steps of bringing a short film to life. They will take you from budgeting and scheduling, to shooting, through editing and distribution. They will offer practical answers to questions from their experiences, as well as references from their projects. 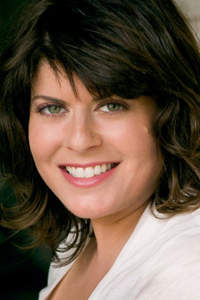 Rebecca Shapiro is an award-winning writer and director for her short films “For Muriel” and “I’m Here”. A graduate of NYU’s Tisch School of the Arts, she began her career at Polygram Records focusing on alternative marketing, before moving on to MTV where she helped re-design their online presence. An accomplished photographer, she has directed and produced documentaries ranging in subject matter from the revival of Burlesque to the struggle of our injured Military Veterans as they strive for Paralympic triumph. She has directed, produced and edited corporate branding and reality television for Pilgrim Films and Television, the Concept Farm, and Lotus Pictures. She is currently developing her feature film directorial debut. 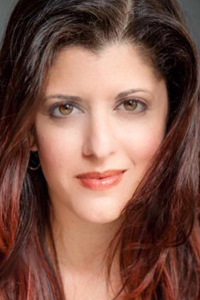 Lea-Beth Shapiro is an award-winning producer for her short films “For Muriel” and “I’m Here”. A graduate of New York University, Columbia University Graduate School of Journalism and the American Film Institute, she began her career producing promos for cable networks USA and the Sci-Fi Channel before transitioning to network news and the Today Show. Her feature films include “Beneath the Dark” which premiered at the South by Southwest Film Festival, before being distributed by IFC Films; and Monte Hellman’s “Road to Nowhere”, which won a Special Lion for Career Achievement at the 67th Venice International Film Festival. She has now formed Not Even the Chair Productions, with her sister, Rebecca, to develop and produce independent films and television projects across all genres to appeal to wide ranging audiences. 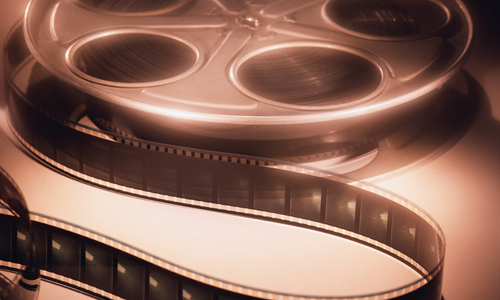 Let’s Get Into It: Producing, Directing and the Business of Film

Don’t be STOPPED! Mark Roberts gets into his personal journey. Lessons he’s learned and tips on how to raise money for development of scripts, films and documentaries. Working with lawyers, managers, talent, casting directors etc. to move your projects forward. Does partnering with producers and production companies help? There will also be a Q&A discussion about film & television what’s working and how to get noticed. 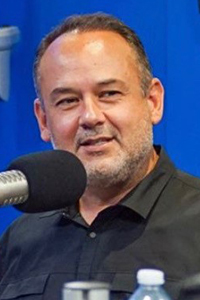 Mark Roberts has been in the entertainment business for over 30 years. He is a first generation Mexican American Film and Television producer with a passion for telling edgy stories that give voice to diverse groups.

Most recently Roberts teamed up with Mario Lopez to produce both “The Expanding Universe of Ashley Garcia” for Netflix (February 17, 2020) and “Feliz NaviDAD” a Christmas movie about a single father, for Lifetime Television to premiere in their holiday line up 2020.

Roberts was also recruited to add his creative touch as Executive Producer and show-runner of Mexico’s “Next Top Model” in its fifth season on Sony’s premiere international channels. The series was produced in Mexico City and Los Angeles under Roberts’ bilingual leadership. At ITV Studios America, Roberts was tasked with developing and show running unscripted series and pilots, which resulted in series sales of “My Ride Rules” for Speed Channel and “Ghostly Lovers” for Travel Channel.

Roberts film work includes, “Water and Power”, a critically acclaimed movie based on the Mark Taper Forum theatrical production, by writer director Richard Montoya of the legendary comedy troupe Culture Clash. A Sundance Film Festival alumni, Roberts was also responsible for “Strangers With Candy the Movie”, written and starring friends Stephen Colbert, Amy Sedaris and Paul Dinello. The film was an official selection of the Sundance Film Festival in 2005.

Earlier in his career, Roberts launched Roberts David Films with producer/director Lorena David and produced over a dozen films including “The Cover Up” with Gabriel Mann and Eliza Dushku, “Danika” with Marisa Tomei and “Poor White Trash”. Prior to that, Roberts built a sought after casting company for television and film series, specials and live events.

Roberts is also host of the fun and informative Let’s Get Into It! podcast which focuses on the film and television business. 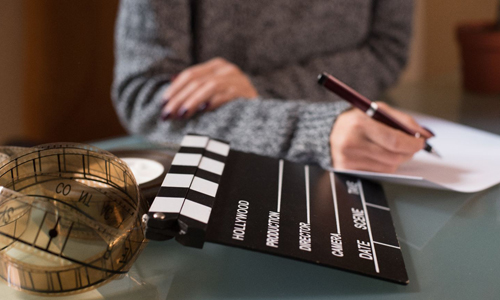 The Execution of Vision: Creating a Short Documentary

How does one find their own unique voice when working with nonfictive material? Jesseca Ynez Simmons shares her experience working on many different types of short documentaries as a director, producer and director of photography. Topics of discussion include research, pre-production, working on a budget, communication between key personnel, having a clear distribution plan and more! 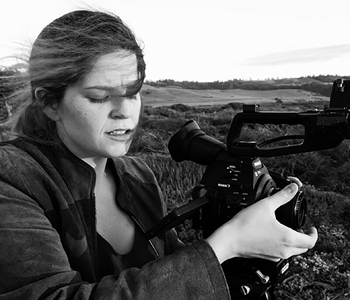 Jesseca Ynez Simmons is a nonfiction filmmaker and Assistant Professor with a special interest in hybrid filmmaking. She has been recognized by the American Society of Cinematographers and was a Southern Exposure Film Fellow for the Southern Environmental Law Center in Birmingham, AL.

Jesseca recently completed her first feature documentary “I Can Only be Mary Lane”, which took home the Director’s Award for Artistic Merit at the 2018 Santa Cruz Film Festival. The film follows one of the last legendary Blues singers that made the Great Migration from the American South as she attempts to record an album at age 82. Gigwise said: “This is a film for all true music lovers. It gives you belief in classic music, as well as the inspiration on how we should all grasp life and squeeze it for all it is worth.”

Originally from the Bay Area, she received her BA in Politics from the University of California, Santa Cruz. She then moved to the Midwest to earn her MFA in Documentary Media from Northwestern University where she was invited to continue post-MFA as Filmmaker in Residence. Jesseca is currently an Assistant Professor of Media Production at the University of Dayton and a Sustainability Scholar for the Hanley Sustainability Institute. 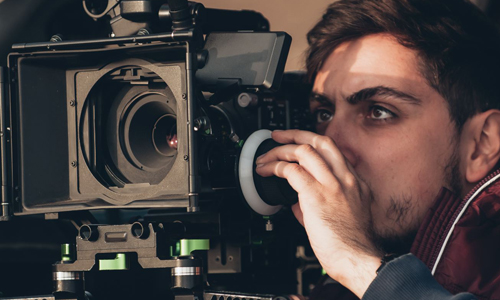 Director Allen Farst discusses how to level up on your next big idea into your next big film. Go behind the scenes as he films The Rolling Stones, Billy Bob Thornton, David Gilmour, President Jimmy Carter, John Mayer, David Letterman and, The Allman Brothers, among others, on an epic journey of in-depth interviews that showcase his work in “Chuck Leavell: The Tree Man”. Pick his brain during this Q&A session, as anything goes, from financing, producing, to distributing and packaging. 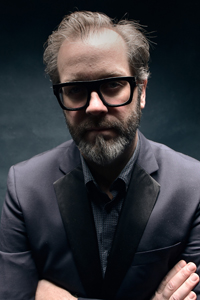 Allen Farst is an acclaimed American director, filmmaker and producer whose most notable work is in action sports, music, documentary films and high-end commercials. His work has been featured by Panasonic, Maxim Magazine, USA Today, Drone360, Nikon Cinema and others.

Recently, Farst signed a deal with Contour by Getty Images to syndicate his work to national and international magazines and digital outlets. Contour is a high-end portraiture collection featuring the most famous faces in film, sports, art, music and fashion. They’re captured exclusively by some of the most acclaimed celebrity photographers in the world. His still work can be seen at www.allenfarst.com

Over the past several years, Allen has produced films for the Rahal Letterman Lanigan Racing team. He works with sponsors like Midas, National Guard, DRIFIRE and Steak ‘n Shake, providing films, teasers, national commercials and still photography, all used to produce many marketing assets for sponsors.

Allen founded Niche Productions in the early 2000s to focus on high-end Hollywood-style productions, which has taken him to film in 14 countries and allowed him to meet scores of wonderful people along the journey.

will take you to the morning Festival Workshops at Steakhouse 89.

There is also free, limited on-site parking at the Restaurant, if you wish to drive.