The Sedona International Film Festival is proud to welcome back 5-time Grammy-nominee David Arkenstone for a very special holiday performance — “A Winter’s Eve Concert with David Arkenstone & Friends” — live on stage at the Sedona Performing Arts Center on Friday, Dec. 16 at 7 p.m.

Join David Arkenstone for an enchanting evening filled with joyful holiday spirits, virtuoso musicianship, and some of his chart-topping favorites reimagined and performed in exciting new arrangements. David has plenty of surprises in store for this performance, including the debut of some of his recent neo-classical compositions with strings, flutes, and percussion.

David has always believed that music can uniquely enrich our lives and ignite our imaginations, and he will use his evocative songs to take you and your family and friends on a one-of-a-kind holiday journey. 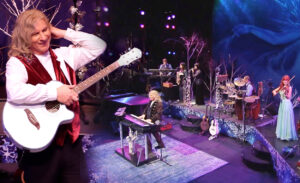 David’s music has long been synonymous with the holidays, taking concert goers on a winter odyssey, feeling right at home amongst the falling snowflakes and energy of the season. Along with songs from his classic albums Christmas Spirit, Celtic Christmas, and Christmas Lounge, David will delight us with holiday fan favorites to warm the heart and spark the holiday spirit. His Yuletide tunes will evoke fond Christmas memories from years past as well as inspire new feelings of joy fit for a contemporary holiday season.

With more than 60 albums to his credit, plus numerous film and game score compositions, and unforgettable themes for NBC (The Kentucky Derby, US Figure Skating, Premier League soccer, and more), David promises a magical family-friendly night to remember — with a little something for everyone! 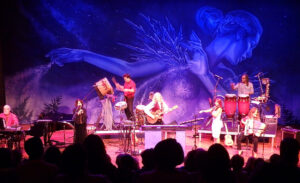 The holiday show holds a very dear place in David’s heart. “I love the winter season!” says David. “It’s a very special time of year, particularly around the winter solstice, and this is a wonderful way to share the magic of the season with family and friends.”

“A Winter’s Eve Concert with David Arkenstone & Friends” takes the stage at the Sedona Performing Arts Center on Friday, Dec. 16 at 7pm. Tickets are $30 General Admission and $25 for Film Festival Members. There are VIP tickets available for $45 (or $40 for Film Festival Members) which include premium seating, lanyard with laminate, signed photo and FREE CD. Call 928-282-1177 to order tickets by phone or visit the box office at 2030 W. State Route 89A in West Sedona. 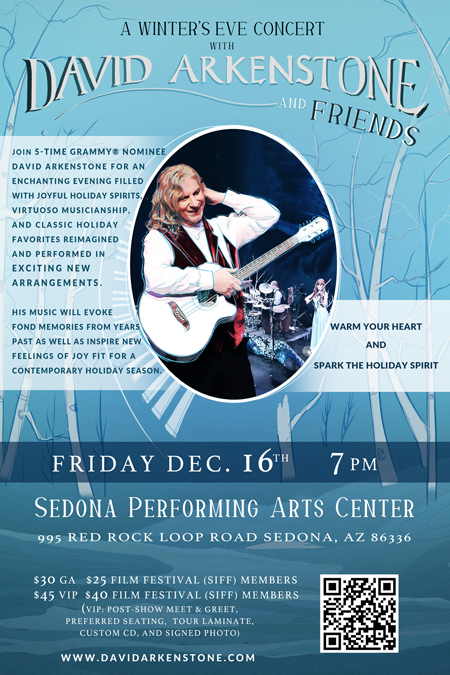