The Sedona International Film Festival is proud to present the next Met Live Opera presentation of Philip Glass’s “Akhnaten” on Saturday, Nov. 23. There will be two shows that day at the Mary D. Fisher Theatre: 11 a.m. (live simulcast) and 4 p.m. (encore).

Plan to come early as John Steinbrunner will lead a pre-opera talk one hour before each production (10 a.m. for the morning show and 3 p.m. for the encore).

In her Met debut, J’Nai Bridges sings the role of Nefertiti, Akhnaten’s bride, and Dísella Lárusdóttir is Queen Tye, the pharaoh’s mother. One of the staging’s distinctive visual features is provided by the Gandini Juggling Company, whose movements are perfectly choreographed with the orchestral score. This production of Akhnaten was originally created by LA Opera, Improbable, and English National Opera, where it premiered, winning the 2017 Olivier Award for Best New Opera Production. 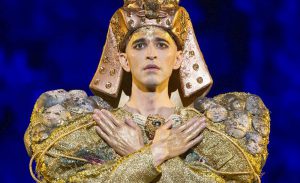 Funeral of Amenhotep III
The opera begins with the death of Amenhotep III. We see him first revealed both as a corpse and as a ghostly figure, reciting words taken from the Egyptian Book of the Dead. During the ceremony, we see a sacred ritual performed in which the body’s organs are carefully taken out and placed into canopic jars and the body is wrapped and embalmed. A ceremony takes place that represents a ritual occurring in the Book of the Dead, in which the pharaoh’s heart is weighed against a feather; if his heart is as light as this, it will ensure that Amenhotep will travel through into the afterlife.

Coronation of Akhnaten
The figure of Amenhotep’s son steps forward and the coronation ceremony begins. The new pharaoh is dressed in sacred robes, and the crowns representing Upper and Lower Egypt are brought together to symbolize Amenhotep IV’s power over all of Egypt. Once he is crowned, the new pharaoh rises up the stairs to make his first pronouncement.

The Window of Appearances
At the Window of Appearances, the pharaoh reveals his intentions to form a monotheistic religion. He changes his name from Amenhotep IV, meaning “spirit of Amon,” to Akhnaten, meaning “spirit of Aten.” Aten, the sun god, is glorified by Akhnaten, his wife Nefertiti, and Queen Tye, his mother. As the trio makes their pronouncement at the window, the sun rises behind them. 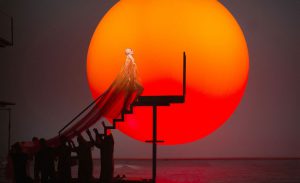 The Temple
Akhnaten and Queen Tye begin to make the changes that he has promised. He leads a revolt to banish the old religion and replace it with his own. Akhnaten enters the temple and finds the priests performing the old religious rituals. Akhnaten banishes them and forms the new order of Aten.

The City
The site for a new city is chosen carefully. The new city of Akhetaten—“The City of the Horizon of Aten”—is built in praise of the new religion.

Hymn
Akhnaten sings a private prayer to his god. His vision of a new religion and a new society is complete. 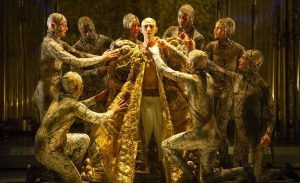 The Family
Akhnaten and Nefertiti dwell in an insular world of their own creation with their six daughters. Meanwhile, Queen Tye is uneasy. She senses unrest beyond the city’s walls. Crowds gather outside the gates, and letters arrive expressing increasing concern about Akhnaten’s self-imposed isolation.

Attack and Fall
The priests of Amon emerge from the gathering crowds and break through the palace doors. The daughters try to escape and are drawn away from Akhnaten and into the swelling mass. Queen Tye and Nefertiti are also separated from Akhnaten, who is finally killed.

The Ruins
Akhnaten’s father mourns his son’s death. Meanwhile, the new pharaoh, the young Tutankhamun, is crowned in a ceremony similar to that of his father, and the old polytheistic religion is restored. Intercutting this ceremony, a group of modern-day students is listening to a lecture given by a professor.

Epilogue
The ghosts of Akhnaten, Nefertiti, and Queen Tye are heard from the ancient world once again.

The Met Live Opera’s “Akhnaten” will be shown at the Mary D. Fisher Theatre on Saturday, Nov. 23 at 11 a.m. (live simulcast) and 4 p.m. (encore). The pre-opera talks will take place one hour before each show. Tickets are $25 general admission, $22 for Film Festival members, and $15 for students. Tickets are available in advance at the Sedona International Film Festival office or by calling 928-282-1177. Both the theatre and film festival office are located at 2030 W. Hwy. 89A, in West Sedona. 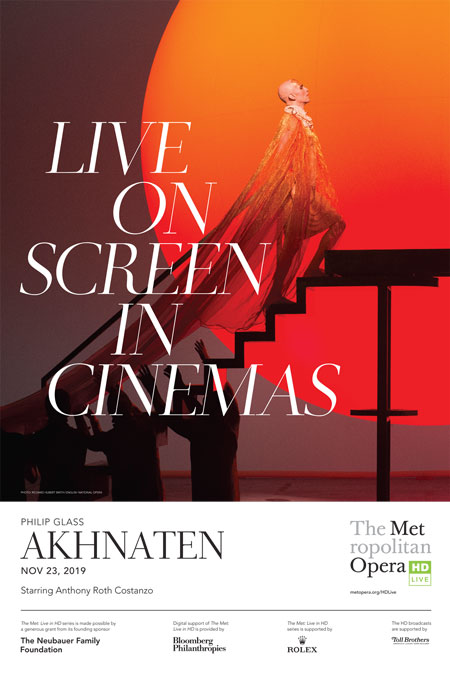