An Evening with Whitney Shay

‘An evening with Whitney Shay’ — A chance to see one of the most dynamic female performers in the Blues music world today.

With sparkly dresses, fiery tresses, and a talent only rivaled by her unstoppable hustle, Whitney Shay is one #busylittlesinger! This four-time San Diego music award winner (including Artist of the Year in 2019), and Blues Music Awards nominee is scorching stages at home, and internationally throughout Europe & South America. Although Covid paused the lives of many, Whitney along with internationally acclaimed guitarist Laura Chavez are incredibly excited to be making their Arizona debut on June 25, 2021 at the Mary Fisher Theatre.

Ms. Shay’s latest release on Ruf Records “Stand Up!” debuted at #1 on the Billboard Blues charts while reaching #1 on the Roots Music Report in 2020.

Whitney has received the praise of many music critics including:

“One of the next best things in Soul music!” — Blues & Rhythm Magazine

“The epitome of a rising star.” — Elmore Magazine

“Every now and then a person comes along that changes everything, Whitney Shay is that type of human being.” — Kenneth Rexrode, Producer of the Six String Society. 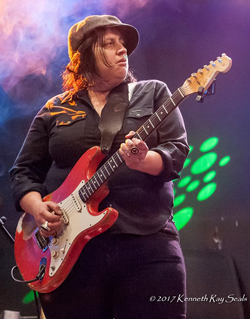 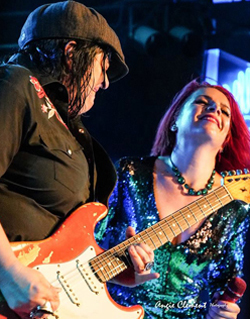 Whitney will be joined by the great Laura Chavez. Commonly known as one of the finest blues, soul, rock guitarists of our generation. Laura was recently just nominated, for the 3rd time, as the best guitarist by the Blues Music Awards to be announced in May of 2021. Laura has toured the world with the likes of Candye Kane, Nikki Hill, Whitney Shay, and several others. When not busy touring she loves being a part of Six String Society productions.

Whether, in studio, on screen, or the stage, Whitney’s electric energy, soulful style, and powerhouse pipes keeps fans captivated throughout every performance. This very special duo show will give Sedona a chance to hear Whitney & Laura on their own while the following evening they will be in the Six String Society’s ‘Celestial Sirens’ cast that will be performing the following evening at the Sedona Performing Art Center at 7 PM.

For more information on Whitney, please visit her website at www.Whitneyshay.com

“An Evening with Whitney Shay” presented by the Six String Society will take place at the beautiful Mary D. Fisher Theatre located at 2030 W. SR 89A in West Sedona on Friday, June 25th at 7 PM. Tickets are $30 and can be purchased by calling the box office at (928) 282-1177 or at the BUY TICKETS link above .

All tickets include a meet and greet with Whitney & Laura after the show in the lobby. 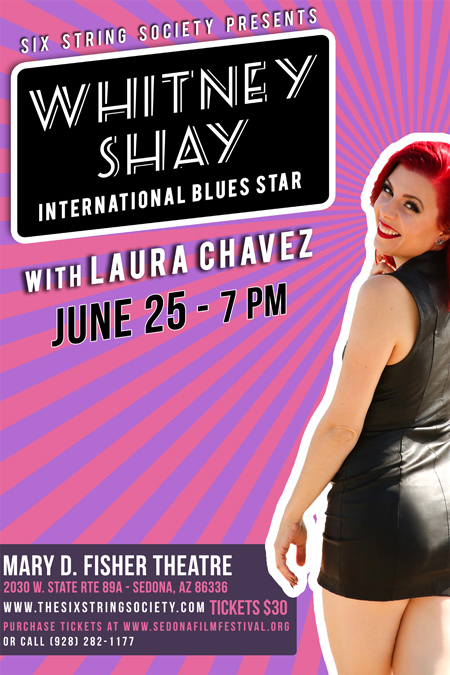