The end of an era. The beginning of everything.

From acclaimed filmmaker James Gray, “Armageddon Time” is a deeply personal story on the strength of family, the complexity of friendship and the generational pursuit of the American Dream.

Based on Gray’s own upbringing in Queens, New York, circa 1980, “Armageddon Time” tells the story Paul Graff (Banks Repeta), a sixth-grader who dreams of becoming an artist while growing up in a dysfunctional working-class Jewish family. His strict parents are played by Anne Hathaway and Jeremy Strong, and his bullying older brother is played by Ryan Sell. Paul has a strong bond with his ailing grandfather (two-time Oscar-winner Anthony Hopkins) and he develops an intimate friendship with his rebellious African-American classmate Johnny (Jaylin Webb).

“Armageddon Time” is an immersive slice of life drama and an intimate film that features stellar performances from Strong, Hathaway, Hopkins and Webb. And then there’s Oscar-winner Jessica Chastain as U.S. Attorney Marianne Trump, who gives a single scene-stealing lecture at Paul’s private school about how hard they’ll have to work for everything they can get.

“Exquisite. A gem of a movie.” – Indiewire 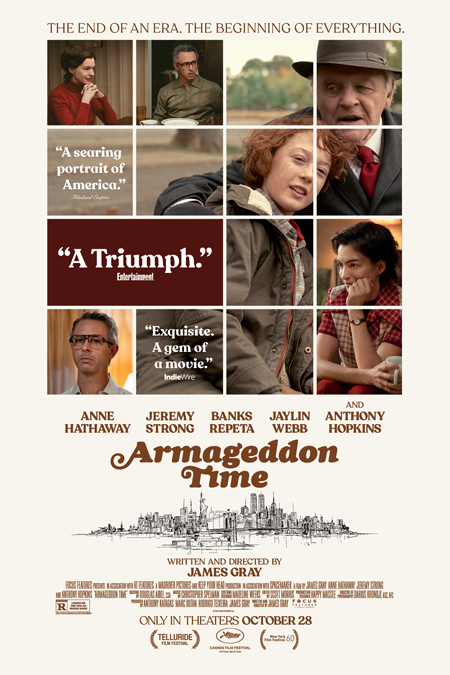