The Banff Mountain Film Festival World Tour is returning to Sedona. For the sixth year, the Sedona International Film Festival is bringing the spirit of outdoor adventure and mountain culture to red rock country. This year’s screenings feature the world’s best mountain sport, culture and environmental films, letting you experience the thrill and challenges of the mountain environments that inspire us all.

The Sedona tour stop has been expanded to two nights again this year: Tuesday, March 10 and Wednesday, March 11 at 7 p.m. at the Sedona Performing Arts Center. Each night will feature a different program of films. Audience members can attend either one of the nights or get a package discount to attend both evenings.

Featured films on Tuesday, March 10 include:

Charge: Four top freeskiers and a World Champion drone pilot are dropped at Chatter Creek, BC for one week. Their instructions: charge as hard as you can every day.
Life of Pie: When Jen Zeuner and Anne Keller moved to the tiny, conservative high desert town of Fruita, Colorado almost twenty years ago, it was not on the map as far as mountain biking was concerned and they were on the fringe and a bit ostracized. Now they’re at the very heart and soul of the community.
Chasing Monsters: Ever considered trying to photograph a storm with over 200km/h winds? Experience the adrenaline-fueled moments as photographer Nick Moir tracks America’s wildest tornadoes to capture the images of nightmares.
Into the Canyon: Pete McBride and Kevin Fedarko tell a story of extreme physical hardship where the bonds of friendship are stretched and the timeless beauty of the Grand Canyon becomes meditation and ultimately a cautionary tale for our complex relationship with the natural world. (Award-winner for Best Mountain Feature)
The Flip: French Skydiver Remi Angeli must face his fears in order to explore new expressions of movement while BASE jumping in Mexico. On the other side of his fear he discovers life in its purest form.
Eli: As a rancher growing up in the rugged northeast corner of the Navajo Nation with no electricity or running water, Eli Neztsosie learned through years of work what it meant to rely on discipline and endurance. Now he relies on those same skills, running long distances.

The Ladakh Project: Seven days, three rivers, one woman. This is the story of Nouria Newman’s solo kayak adventure in the Indian Himalaya.
Out on a Limb: Engineer Kai Lin teams up with climber Craig DeMartino to design a badass prosthetic foot, which if they succeed won’t just level the playing field, but will dish up, if not superpowers, then a real sense of empowerment. Which is almost the same thing. (Special Jury Award)
A Nordic Skater: The story of a man who uses every sense he has to travel on thin ice while Nordic skating in the Oslo region of Norway. He tells the story of how the little known sport of Nordic skating came to play a big part in his life.
Siblings: A short coming-of-age film that celebrates childhood and the relationship between siblings.

Featured films on Wednesday, March 11 include:

Hors Piste: The two best mountain rescue workers of the region are ready for their new mission. Despite their professionalism and their determination, it will not go as planned.
Opening the Earth: The Potato King: Julio Hancco is a guardian of biodiversity, critical to the survival of humanity. He represents a people, a culture, and way of life that is being lost to modernization. Will their culture survive? Or will it all be lost with the last Potato King?
Camel Finds Water: Trevor found the hull of an abandoned fishing boat in a field. He brought it home and built it back to a sea-worthy state over the course of a summer. Then, he took it on its maiden voyage to British Columbia in search of waves.
Spectre Expedition: 1000 miles, 200+ kgs, 65 days, 3 mates, 1 mountain. Unsupported, using snow-kites to travel great distance, with massive loads at speeds up to 60 kmph this is the epic tale of Leo Houlding, Jean Burgun & Mark Sedon’s daring dream to reach the summit of the most remote mountain on Earth; The Spectre, Antarctica.
The Motivator: Filmmaker Aaron Hitchins turns his camera on the person who has motivated him to lead a life connected to the outdoors: his mother, Maureen.
The Long River Home: US veterans who were injured in war come together for another mission as they guide blind Navy veteran, Lonnie Bedwell, on a 14 day river trip in the Grand Canyon.
Safe Haven: Founded on the belief that everyone is welcome, Memphis Rox opened a climbing gym to challenge stereotypes and be at the center of the city’s revitalization.
Circle of the Sun: Steep mountains, the ocean, the sun and the aurora borealis. One rotation of the sun high in the Arctic on skis equals one day of magic.

Gone Tomorrow: Kentucky Ice Climbing: A bourbon-fueled ride deep into the bushy hollers of Appalachia with a crew of harmless misfits as they race to search out and climb new ice routes before they’re gone.
Danny Daycare: In his latest film Danny MacAskill takes on some child care the only way he knows how… by taking them for a wee bike ride around Scotland!

The Banff Mountain Film Festival World Tour stop in Sedona is made possible by a generous grant from the Leo & Rhea Fay Fruhman Foundation and the Arizona Community Foundation of Sedona. 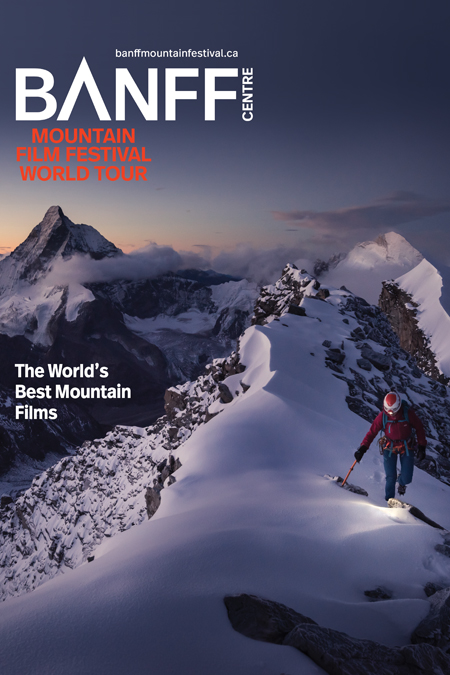