The Sedona International Film Festival is proud to partner with Unify Sedona: A Rainbow Alliance and PFLAG Sedona/Verde Valley to present the premiere of “Becoming More Visible” on Wednesday, Nov. 20 at 4 p.m. at the Mary D. Fisher Theatre.

This special screening of “Becoming More Visible” is presented in honor of Transgender Day of Remembrance. Please join us for a Q&A discussion followed by a vigil and reception after the viewing of the film at Heartline Café to honor our transgender siblings whose voices have been silenced because they had the courage to live by and have died for their truths.

Challenged by how to identify since early childhood, four fearless transgender young adults defy societal norms to be their true selves and become more visible.

No transition is easy but some are easier than others. We follow Sean, a transgender male comedian from a small affluent town in upstate NY; Katherine, a Bangladeshi transgender girl from a close-knit Muslim family; Olivia, who had to leave everything behind and enter the shelter system in order to be the woman she knows she is; and the unforgettable Morgin, a fully transitioned woman pursuing her musical ambitions and making her way in the world.

The film follows each of our featured young people as they transition into their authentic identity.

We take an intimate look at the lives of these young adults as they transition. Their stories are taken out of the fringes and placed into everyday, relatable life. We hang out with these kids in their bedrooms, doctor’s offices, support groups, Pride events, as well as at public speaking engagements, in subsidized housing projects, well-to-do homes, and on the streets of New York. They open up about their fears of not being accepted, the difficulties of transitioning, the loss of connection with their families, financial and healthcare issues, discrimination and thoughts of hopelessness and suicide. We see their struggles first hand, and also their delights when their bodies and minds begin to match for the first time.

This special Sedona premiere of “Becoming More Visible” is co-presented by Unify Sedona: A Rainbow Alliance and PFLAG Sedona/Verde Valley and made possible by a grant from The Center for LGBTQ Philanthropy at the Arizona Community Foundation.  There will be a community discussion and Q&A following the screening and a vigil and reception at Heartline Cafe. 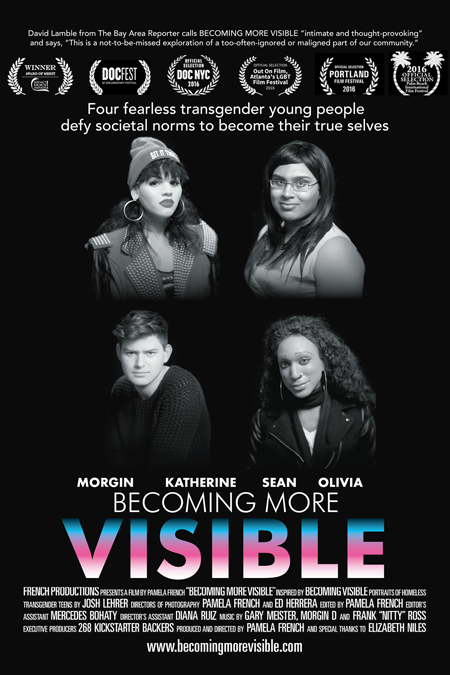