Billie Holiday sang the truth, but she paid the price.

Billie Holiday had one of the greatest voices of all time and changed the face of American music. She was a woman of breath-taking talent and global popularity while also stirring controversy. She started a notable rebellion singing “Strange Fruit” which exposed the realities of Black life in America and earned her powerful enemies.

Raw, emotional and brutally honest, “Billie” is filled with never-before-heard interviews from those who knew her best: musical greats like Charles Mingus, Tony Bennett, Sylvia Syms and Count Basie. The film features performances restored into color for the first time. It helps paint the picture of a singer who earned iconic status in her short, turbulent life. She died almost penniless in 1959 at age 44.

The documentary weaves her story through one of her most enamored fans, Linda Lipnack Kuehl, who in 1971 set out to write a definitive biography. Over eight years, she tracked down and recorded over 200 hours of interviews with the characters that knew Holiday personally. Kuehl’s book was never finished, and the tapes never before heard until now. The film was which was made with cooperation of the singer’s estate.

Director James Erskine delivers a mesmerizing tribute that captures the talent and torment of the most influential jazz singer of all time. Audiences will swoon at the performance footage and be riveted by the intimate revelations in these previously unheard interviews.

“A transfixing documentary about the master jazz singer.” – Variety 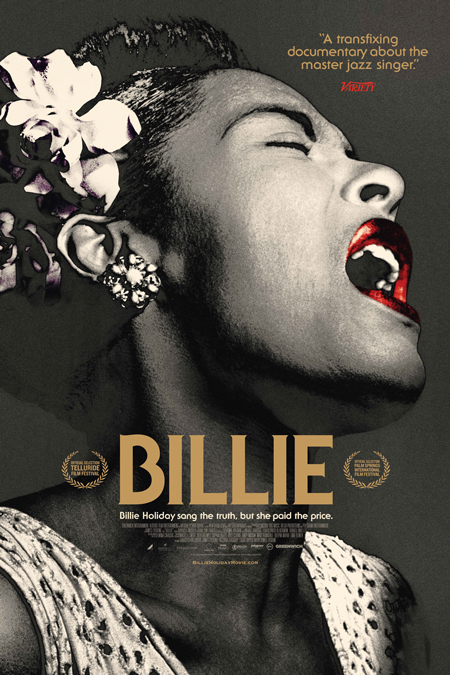