The Sedona International Film Festival is proud to present the Northern Arizona premiere of the critically-acclaimed and powerful new film “Clemency” Feb. 14-20 at the Mary D. Fisher Theatre.

Years of carrying out death row executions have taken a toll on prison warden, Bernadine Williams (Alfre Woodard). The emotional wedge in her marriage grows. Memories of a recently botched execution plague her daily. As she prepares to execute another inmate, Bernadine must confront the psychological and emotional demons her job creates, ultimately connecting her to the man she is sanctioned to kill.

“I spent four years researching for ‘Clemency’. I spoke with six different wardens, interviewed corrections officers, death row lawyers, Lieutenants and a Director of Corrections about their experiences working in prisons and in death row facilities. I spoke with men currently on death row and one man who was exonerated from death row, after being incarcerated for 28 years for a crime he did not commit,” said director Chinonye Chukwu.

“The film observes a world that few audiences have gotten a realistic look into. Most American prison films include melodramatic depictions of prison life, but ‘Clemency’ is rooted in an unfiltered realism that will, hopefully, force audiences to connect to the humanities that exist between prison walls.”

“Like the movie she inhabits with every fiber of her being, Woodard is some kind of miracle.” — Peter Travers, Rolling Stone

“In ‘Clemency’, Alfre Woodard gives a masterful performance (one in a career of many), leading a strong cast that includes Aldis Hodge, Richard Schiff and Danielle Brooks.” — Sara Stewart, New York Post

“Ms. Woodard is superb, as always, in a role that sets up a formidable barrier between character and audience.” — Joe Morgenstern, Wall Street Journal 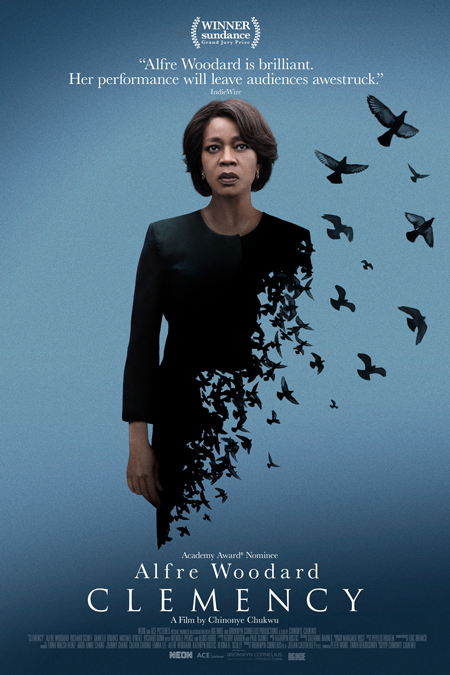