A triumph at Sundance, this inspired collaboration between director A.J. Eaton and producer Cameron Crowe coaxes Crosby, member of three major groups in music history (The Byrds; Crosby, Stills & Nash; and Crosby, Stills, Nash & Young), into unflinching candor as the singer-songwriter confronts mortality and assesses the damage of earlier days. At the same time, his redemptive journey back to music is universally inspiring and uplifting, bearing an emotional impact that transcends the rock documentary genre.

In the illuminating twilight of his days as a living legend, “Croz” has chosen living over the legend. He’s making less money but more music than ever, hitting the road despite serious health issues, surrounded by young players who have helped inspire a critically-acclaimed creative streak of fresh songs, albums, and performances.

As a troubled talent but uncompromising and principled spirit whose voice has been harmoniously woven into the fabric of pop culture and music royalty since the mid-1960s (first with the Byrds but most famously as a founding member of the super-group Crosby, Stills, Nash & Young), Crosby finally distinguishes himself as a masterful raconteur and unsparingly self-aware survivor.

Taking viewers through soaring career highs, along with the chemical variety that led to ravaging addictions and serious prison time, “David Cosby: Remember My Name” explodes myths and sheds profound new light on all the music, politics, and personalities that crossed his incredible — and ongoing — path. Only Crowe and Eaton could have composed a cinematic portrait so intimate and unforgettable.

“Electrifying! One of the best rock docs of all time! Raw and riveting! Hear him roar! Rock on, Crosby!” — Peter Travers, Rolling Stone

“A terrific movie! A shamanistic parable of pleasure and pain, beauty and loss.” — Owen Gleiberman, Variety

“An affectionate and moving chronicle of a story well worth telling.” — Steve Pond, The Wrap 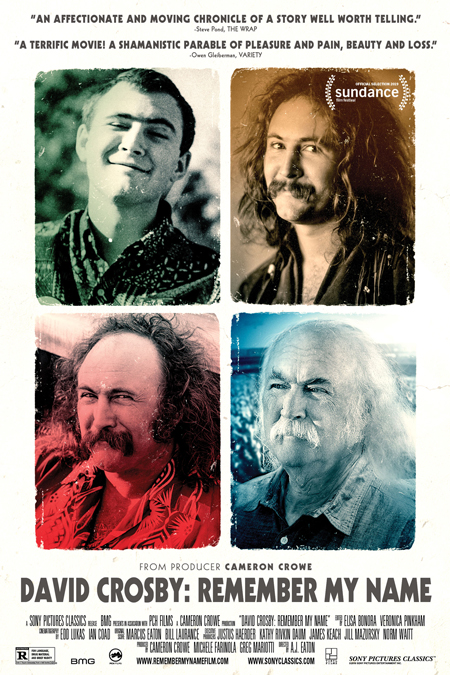