Hell of a Heartache

The Verde Valley Sanctuary has been experiencing a “hell of a heartache”, missing our community for the past several months. After what seems like forever, we are coming back out of the shadows.

The Sedona International Film Festival is proud to partner with Verde Valley Sanctuary to present the one-day-only encore return of “Hell of a Heartache” on Saturday, Oct. 3 at 4 and 7 p.m. at the Mary D. Fisher Theatre.

Filmed entirely in the Verde Valley, using all local cast and crew, “Hell of a Heartache” premiered to rave audience reviews at the recent Sedona International Film Festival.

“Hell of a Heartache” is an epic tale of a family torn apart by domestic violence. It is returning to Sedona for this special event in observance of National Domestic Violence Awareness Month.

“We cannot allow this issue to remain in hiding as the need continues every day for the service we provide,” said Nicole Florisi, Executive Director of the Verde Valley Sanctuary. “We are hosting this as a fundraising event to provide for immediate needs of the Verde Valley sanctuary.”

About the film:
Bobby Thompson is a down-and-out, hard-partying country music singer. His wild and reckless ways are interrupted when he learns he might have a 12-year-old daughter. When she is dumped off unexpectedly at his motel room one day, Bobby’s life takes a sudden new turn.

An engaging Q & A with Rob Burson (the film’s director and star), Nicole Florisi (Executive Director of the Verde Valley Sanctuary) and Jerald Monahan (Chief of Police Yavapai College) will be held after both screenings.

The event will also feature a reception with catering and delightful delicacies will be provided by Phyllis Cline.

“Hell of a Heartache” will be shown at the Mary D. Fisher Theatre at 4 and 7 p.m. on Saturday, Oct. 3. Tickets are $12, or $9 for Film Festival members, with proceeds benefiting the Verde Valley Sanctuary. 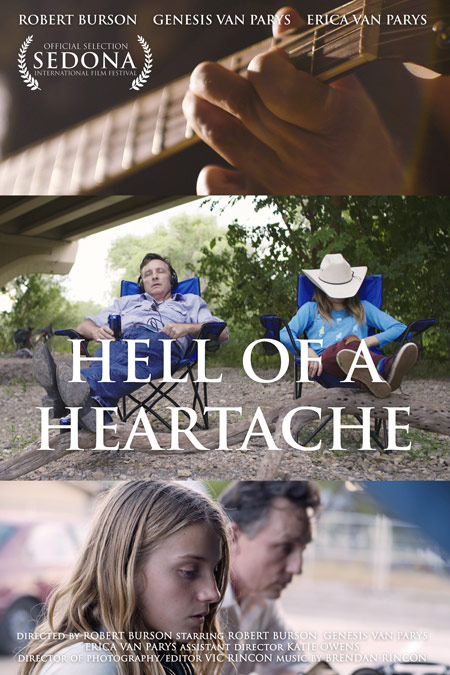