I Carry You With Me

The Sedona International Film Festival is proud to present the Northern Arizona premiere of the acclaimed new drama “I Carry You With Me” showing July 30-Aug. 5 at the Mary D. Fisher Theatre.

“I Carry You With Me” — Academy-Award-nominee Heidi Ewing’s luminous, moving debut as a narrative filmmaker — follows a tender romance spanning decades.

Starting in provincial Mexico and continuing as first Iván, then Gerardo, journey towards sharing a life together in New York City, “I Carry You With Me” is an intimate love story, as well as a soulful rumination on family, sacrifice, regret, and ultimately, hope.

Ewing gracefully traces both men’s lives from their childhoods in Mexico, through the decisions that lead them into adulthood. Iván, an aspiring chef and young father, hopes to secure a spot in a restaurant’s kitchen while supporting his child. But the discovery of his relationship with Gerardo causes conflict, and in despair, he makes the arduous choice to cross the border into the United States, promising his son and his soulmate Gerardo that he will return.

Textured with small moments of intimacy, “I Carry You With Me” is also richly alive with the breadth of its cross-cultural perspective and broad expanse of time. Though based on a true story, the film is boldly original – an impressionistic, open-hearted take on the American Dream, told by a filmmaker drawing on her years of practice in capturing the human experience.

“Innovative, heartbreaking, vital and absolutely extraordinary! Anchored by two superb performances, this romance gets scaled up to a searing saga of the undocumented experience in which love is the binding force.” — Entertainment Weekly

“An intimate epic, imbued with a warmth and tenderness that radiate from both behind and in front of the camera. A poignant, politically resonant love story.” — The Hollywood Reporter 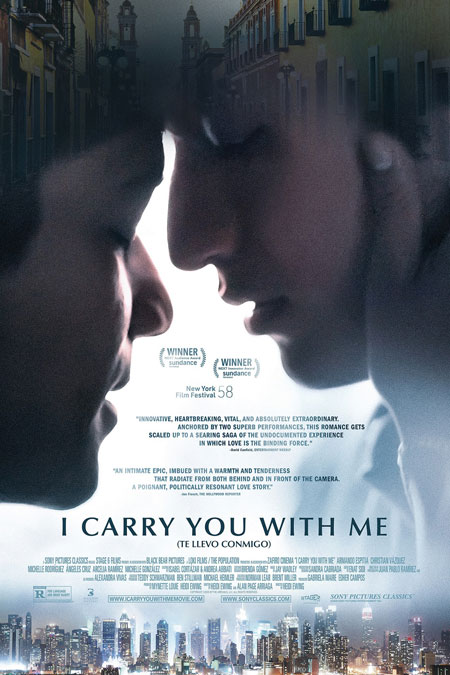