The Sedona International Film Festival is proud to present the Northern Arizona premiere of “Jy Myself” on Tuesday, Sept. 24. There will be two shows at 4 and 7 p.m. at the Mary D. Fisher Theatre.

“Jay Myself” documents the monumental move of renowned photographer and artist, Jay Maisel, who, in February 2015 after forty-eight years, begrudgingly sold his home — the 36,000 square-foot, 100-year-old landmark building in Manhattan known simply as “The Bank.”

Through the intimate lens of filmmaker and Jay’s protégé, noted artist and photographer Stephen Wilkes, the viewer is taken on a remarkable journey through Jay’s life as an artist, mentor, and man; a man grappling with time, life, change, and the end of an era in New York City.

Jay Maisel purchased the 1898 Germania Bank Building in 1967 for $102,000. For forty-eight years, he lived in the building, alone, and then with his wife and daughter, using it as not only as his studio and home, but also as his personal museum of extraordinary things. A collector of anything and everything in which he found beauty, each floor of the building represented a cross section of his mind; for the bank was more than just Jay’s home—it was his muse, and he never, ever dreamed he’d have to leave.

Enter photographer Stephen Wilkes, the only filmmaker Jay would allow into his universe for the most significant transition of his life. At nineteen years old, Stephen rang the bell at 190 Bowery and dropped off his portfolio. The next day, Jay brought him upstairs, past the studio Roy Lichtenstein was renting, and hired him — becoming Stephen’s lifelong mentor and friend.

In 2015, due to the high costs of taxes and maintenance, Jay was forced to sell the bank, for a staggering $55 million dollars, making it the single largest real-estate sale in the history of New York City. Upon learning of the historic sale and Jay’s massive imminent move, Stephen knew he had to document it. And, miraculously, Jay let him in with a camera crew. Captured through an intimate lens of deep personal love and respect, Stephen takes viewers on a journey to the Wizard of Oz of the Downtown Art Scene — an up-close-and-personal look at the man behind the curtain and the mystique of “The Bank” he lived in.

The film explores the true meaning of wealth in a time of excess, the joys and complexities of a mentor/mentee relationship, and the journey of a man grappling with the onset of time and change. With unprecedented access to Jay, “The Bank,” and everything in between, “Jay Myself” captures a moment in New York City history that we will never see again.

“Energetic … a fun journey. Maisel’s work covers as much under the sun as a single photographer can capture in a lifetime.” — Glenn Kenny, The New York Times

“Lovely! Every building, every street, every person is endowed with near mystical beauty.” — Owen Gleiberman, Variety

“One of the most esteemed, influential photographers of his generation. Jay Maisel suggests a comical amalgamation of William Friedkin and Marlon Brando.” — Derek Smith, Slant 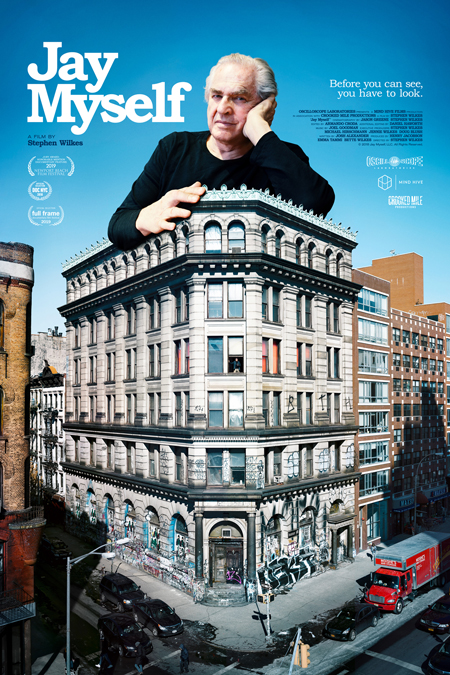