The Sedona International Film Festival presents Ballet in Cinema on Sunday, Nov. 17 when it hosts the big screen premiere of “Le Corsaire” from the Bolshoi Ballet in Moscow. There will be one show at 3:00 p.m. at the festival’s Mary D. Fisher Theatre.

“Le Corsaire” features music by Adolphe Adam and choreography by Alexei Ratmansky after Marius Petipa. The cast includes the Bolshoi’s principal dancers and soloists, accompanied by the corps de ballet from the Bolshoi.

Inspired by Lord Byron’s epic poem, this miracle of the repertoire is one of the Bolshoi’s most lavish productions. This grand romance is made especially for those who seek miracles in theatre.

On the bazaar square of Andrinopolis, the Pacha is struck by the beauty of Medora and tries to buy her, but the lovely young woman is not for sale. As the transaction is about to be completed, Medora is kidnaped by Conrad, a charming corsair (pirate) who catches her eye.

Bolshoi Prima Ballerina, the “mesmerizing” Ekaterina Krysanova and Leading Soloist Igor Tsvirko ignite Medora and Conrad’s passion with undeniable intensity. (The Guardian) Le Corsaire remains a breath-taking production reworked by Alexei Ratmansky, who has created enough dancing for nearly the entire troupe, along with luxurious cinematic sets and a shipwreck, bringing the magnificence of the Bolshoi to life. 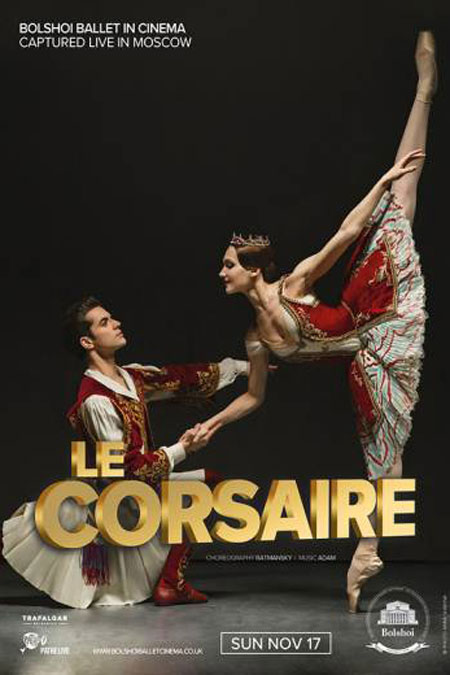