Written by his late father, Jack Fincher, “Mank” is the story of the writing of “Citizen Kane” and also a startling, insightful and humorous exploration of creation, addiction and the search for self-respect.

Gary Oldman is Herman Mankiewicz, a veteran studio screenwriter who worked on everything from Marx Brothers comedies to “The Wizard of Oz”. He was also a hopeless gambler and heavy drinker who was less than respectful of his chosen profession.

“Mank” sees the title character in a metaphorical last chance saloon, holed up in a bungalow in the Californian desert in 1940, employed by Orson Welles (Tom Burke) to write a screenplay – with no studio interference.

Mankiewicz needs money, but as the writing goes on – with the support of secretary Rita Alexander (Lily Collins) – he becomes more creatively invested, fueled by memories of old friends … and enemies.

Back in the 1930s, he clashed with M.G.M studio chiefs Louis B. Mayer (Arliss Howard) and Irving Thalberg (Ferdinand Kingsley), disgusted not only at their hubris, but at his own part in the system. He also befriended movie star Marion Davies (Amanda Seyfried) and met her lover, William Randolph Hearst (Charles Dance), a hugely wealthy and influential media mogul.

Mank’s exposure to the establishment, and to a charismatic figure who valued power more than people, would eventually give the screenwriter an idea. Memories of life feed his art as he works furiously on the screenplay for what will become “Citizen Kane”, the film many consider the greatest of all time. 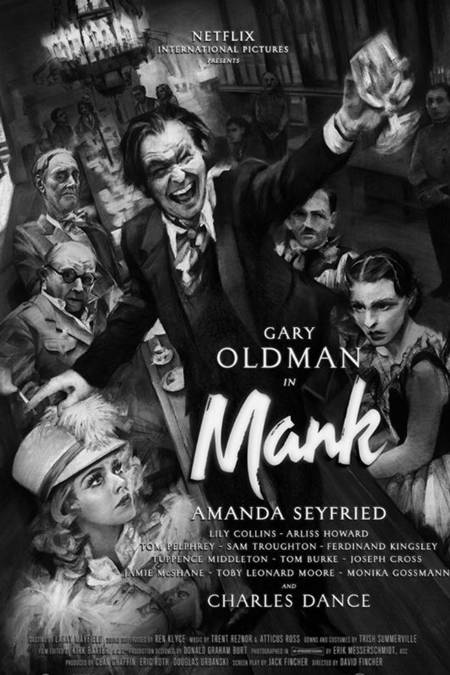