The Sedona International Film Festival is proud to present the next Met Live Opera presentation of Jules Massenet’s “Manon” on Saturday, Oct. 26. There will be two shows that day at the Mary D. Fisher Theatre: 10 a.m. (live simulcast) and 4 p.m. (encore).

Plan to come early as Ed Ingraham will lead a pre-opera talk one hour before each production (9 a.m. for the morning show and 3 p.m. for the encore).

A take on the quintessentially French tale of the beautiful young woman who is incapable of forsaking both love and luxury, Massenet’s “Manon” features one of the truly unforgettable, irresistible, and archetypal female characters in opera. While the story is firmly set in class and gender issues of the past, the character of Manon herself is timeless, convincing, and familiar. The opera has been a success ever since its premiere, championed by a diverse roster of singers who have cherished its dramatic opportunities, exalted style, and ravishing music. 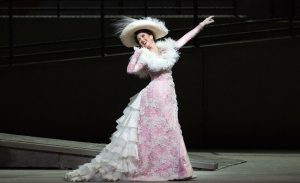 Act I
The noblemen de Brétigny and Guillot de Morfontaine are having dinner with three young women—Poussette, Javotte, and Rosette—at an inn in Amiens. People gather for the arrival of the coach to Paris, among them Lescaut. He is waiting for his young cousin Manon, who is on her way to enter a convent. The coach arrives and Manon expresses her exuberant joy about her first journey away from home. Enchanted by her, Guillot offers to take Manon to Paris, but she and his companions laugh at him. Lescaut reproaches Manon for her behavior, which could shame their family. Manon gazes with envy at the elegant clothes of the other girls. The young Chevalier des Grieux arrives too late to catch the coach, which has already left for Paris. He falls in love with Manon at first sight, and when she tells him that it is her fondness for pleasure that has led her family to send her to a convent, he is determined to rescue her from such a fate. They escape together in Guillot’s coach. The returning Lescaut furiously accuses Guillot of having kidnapped his cousin, but then learns from the innkeeper that Manon went off with a young man. Guillot, mocked by everyone, swears revenge on the eloping couple.

Act II
In their apartment in Paris, des Grieux writes to his father for permission to marry Manon. The maid announces visitors: Lescaut and another man, who, she warns Manon, is de Brétigny in disguise. Lescaut, using the argument of family honor offended, berates des Grieux for having abducted Manon. In fact he is trying to profit by setting her up with de Brétigny. Des Grieux, to prove his honorable intentions, produces his letter. Meanwhile, de Brétigny tells Manon that des

Grieux’s father is planning to kidnap his own son that evening; if she does nothing to prevent it and instead comes to live with de Brétigny, she can have wealth and luxury. After Lescaut and de Brétigny have left, des Grieux goes out to post his letter. Manon realizes she is unable to resist de Brétigny’s offer and bids farewell to her life with des Grieux. Des Grieux returns to find her weeping, but she will not tell him why. He talks of his dream of an idyllic future together in the country. When there’s a knock on the door Manon begs him not to answer it, but he goes. Looking out the window, she sees him being abducted. 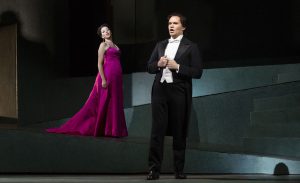 Act III
On a public holiday, a crowd has gathered at the Cours-la-Reine. Manon, now living with de Brétigny and the toast of Paris, praises the pleasures of her luxurious existence. Overhearing a conversation between de Brétigny and the Count des Grieux, she learns that the count’s son, following an unhappy love affair, is about to become a priest and will preach later that day at the seminary of St. Sulpice. Manon doesn’t believe that des Grieux could have forgotten her and leaves the festivities to find him.

At St. Sulpice, des Grieux has attracted much admiration for his sermon. The count tries to dissuade his son from entering the priesthood in favor of marriage. Des Grieux is adamant but realizes that he can’t forget Manon. When she appears he angrily confronts her. She admits her guilt but begs him to forgive her and to remember their past love. Des Grieux yields to his feelings and renounces his vows.

Act IV
Gamblers are gathered at the Hôtel de Transylvanie, among them Guillot and Lescaut. Manon and des Grieux arrive, and she reminds him that his fortune has nearly run out. He accepts Guillot’s challenge to play. Manon, Poussette, Javotte, and Rosette consider what money might bring them. Des Grieux wins heavily and Guillot accuses him of cheating, threatening to inform the count. The police arrive and des Grieux is arrested. The count assures his son that he will be released soon. Manon, as his accomplice, is taken away to prison. 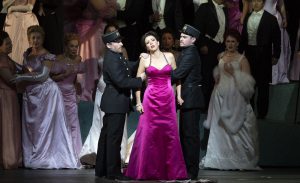 Act V
Des Grieux and Lescaut have come up with a plan to rescue Manon, who has been sentenced to deportation to America, but their paid accomplices have deserted them. Lescaut manages to bribe the guards and leaves Manon and des Grieux alone together. Ill and exhausted, she begs des Grieux to forgive her for the shame she has brought him. While she recalls their past, he only thinks of their future together. But the rescue has come too late. As des Grieux assures her of his forgiveness and love, Manon dies in his arms.

The Met Live Opera’s “Manon” will be shown at the Mary D. Fisher Theatre on Saturday, Oct. 26 at 10 a.m. (live simulcast) and 4 p.m. (encore). The pre-opera talks will take place one hour before each show. Tickets are $25 general admission, $22 for Film Festival members, and $15 for students. Tickets are available in advance at the Sedona International Film Festival office or by calling 928-282-1177. Both the theatre and film festival office are located at 2030 W. Hwy. 89A, in West Sedona. 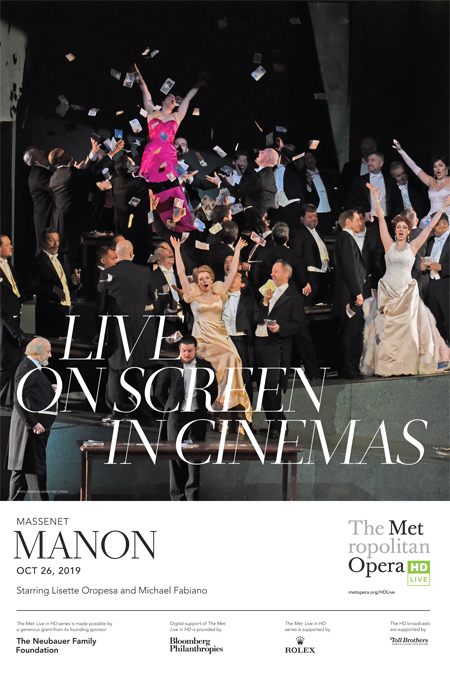