The Sedona International Film Festival is proud to present the Met Live Opera: Live in HD series for the 2022-23 season. Once again, the festival will host the productions via satellite at its Mary D. Fisher Theatre, 2030 W. State Route 89A in West Sedona.

Each opera will be shown LIVE and then repeated the following Wednesday as an encore. Season ticket holders will have the option of choosing the live performance or the encore (or can mix and match for scheduling convenience).

The Met: Live in HD, the Metropolitan Opera’s award-winning series of live high-definition cinema simulcasts, began its 16th season on October 22, with a live transmission of Cherubini’s “Medea”, a Met-premiere production starring soprano Sondra Radvanovsky in the title role.

In addition to Medea, the 2022–23 Live in HD season will feature two more company premieres, both led by Met Music Director Yannick Nézet-Séguin: Kevin Puts’ “The Hours”, in its world-premiere production, starring the powerhouse trio of soprano Renée Fleming, mezzo-soprano Joyce DiDonato, and soprano Kelli O’Hara, and the Met premiere of Terence Blanchard’s first opera, “Champion”, about the life of boxer Emile Griffith.

Four additional new productions will be presented throughout the season: Giordano’s “Fedora” with soprano Sonya Yoncheva in the title role; Wagner’s “Lohengrin” starring tenor Piotr Beczała; and two Mozart operas conducted by Nathalie Stutzmann, including a cinematic staging of “Don Giovanni” by Ivo van Hove and Simon McBurney’s production of “Die Zauberflöte”, which raises the orchestra pit to allow interaction with the cast.

Live in HD audiences will also have the chance to see Michael Mayer’s celebrated production of Verdi’s “La Traviata” starring soprano Nadine Sierra as Violetta; and the return of two of Robert Carsen’s productions, including Verdi’s “Falstaff”, with baritone Michael Volle singing the title role in his first Verdi opera at the Met, and Strauss’s “Der Rosenkavalier”, with soprano Lise Davidsen and mezzo-soprano Isabel Leonard as the Marschallin and Octavian.


Tickets for each opera are $25 general admission, $22 for Film Festival members, and $15 for full-time students. For more information, please call the Sedona International Film Festival at 928-282-1177 or visit the office at 2030 W. State Route 89A, Suite A3 in West Sedona. Information and tickets are also available at the BUY TICKETS link above.

CLICK HERE to read about each opera and to purchase tickets. 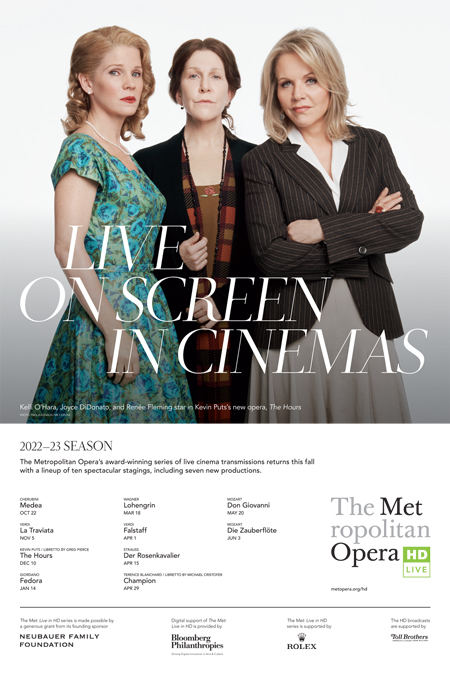