Met Live Opera:
Fire Shut Up in My Bones

The Mary D. Fisher Theatre is honored to be the home for the Met Live Opera programs for the 2021-2022 season, presented by the Sedona International Film Festival. The season will continue with Terence Blanchard’s “Fire Shut Up in My Bones” on Saturday, Oct. 23. There will be one show at 10 a.m. — a live simulcast as it is happening at the Met!

Plan to come early as Russell Fox will lead a pre-opera talk one hour before the production.

Met Music Director Yannick Nézet-Séguin conducts Grammy Award–winning jazz musician and composer Terence Blanchard’s adaptation of Charles M. Blow’s moving memoir. The first opera by a Black composer presented on the Met stage and featuring a libretto by filmmaker Kasi Lemmons, the opera tells a poignant and profound story about a young man’s journey to overcome a life of trauma and hardship.

James Robinson and Camille A. Brown — two of the creators of the recent production of the Gershwins’ Porgy and Bess — co-direct this new staging. Baritone Will Liverman, stars as Charles, alongside sopranos Angel Blue as Destiny/Loneliness/Greta and Latonia Moore as Billie.

Act I
Charles Blow, age 20, drives down a Louisiana backroad with a gun in the passenger seat. Destiny sings to him, calling him back to his childhood home. He begins reliving memories from his childhood.

Charles’ seven-year-old self, Char’es-Baby, talks to his mother, Billie. He is desperate for affection, but Billie is too frazzled to give him the validation that he craves. They are dirt poor. Billie works in a chicken factory, but she dreams of Char’es-Baby getting a good education and escaping their town. Her husband, Spinner, is a womanizing spendthrift. When she hears that he’s flirting with other women, she confronts him at gunpoint. She doesn’t shoot, but Billie tosses Spinner out. Billie and her five sons move in with Uncle Paul. Char’es-Baby dreams of a different life, collecting “treasure” from the junkyard while Loneliness sings to him. One day, his cousin Chester comes to visit. When Chester sexually abuses him, he is too horrified and ashamed to say anything.

Adult Charles begins to weep as he recoils from these memories, while Destiny reminds him that there is no escape.

Act II
As Charles grows into a teenager, he is full of confusion and rage. He attends a church service where the pastor is baptizing people, promising that God can wipe all sins clean. Charles decides to get baptized, but phantom terrors still haunt him. Charles tries to talk to his brothers, but they refuse to engage in any “soft talk.” Loneliness reappears, promising to be his lifelong companion. Evelyn, a beautiful young girl, interrupts Charles’s reverie. Their chemistry is clear. Charles feels a new sense of independence and is finally ready to strike out on his own; Grambling State University has offered him a full scholarship. Billie is left alone to reflect on all that she has sacrificed for her family and wonders what might lie ahead.

Act III
Charles is one of several fraternity pledges being hazed at his college. Charles stoically takes each indignity in stride: Pain is nothing new for him. Later, he goes to a nightclub and meets an attractive young woman, Greta. They begin a passionate love affair. Charles eventually shares his awful secret with Greta, only to find out that she’s still seeing someone else. Charles is left alone again. He calls home, desperate to hear his mother’s voice. To his shock, Billie tells him that Chester has come back to visit. Charles instantly decides to return home to confront Chester, gun in hand.

Charles sits in his car on the dark road, contemplating the choice lying before him. Destiny starts to sing to him once again, seductively promising to stand by him through to the bloody end. As Charles reaches his childhood home, Char’es-Baby appears, urging him to leave his bitterness behind. Charles must decide whether to exact his revenge or begin his life anew.

The Met Live Opera’s “Fire Shut Up in My Bones” will be shown at the Mary D. Fisher Theatre on Saturday, Oct. 23 at 10 a.m. (live simulcast). The pre-opera talks will take place one hour before the show. Tickets are $25 general admission, $22 for Film Festival members, and $15 for students. Tickets are available in advance at the Sedona International Film Festival office or by calling 928-282-1177. Both the theatre and film festival office are located at 2030 W. Hwy. 89A, in West Sedona. 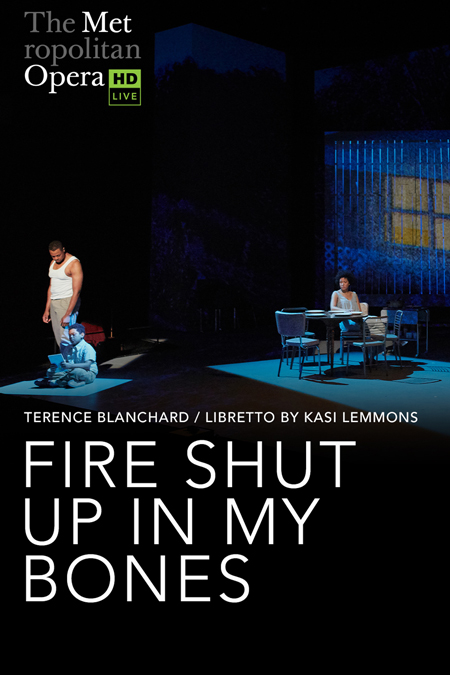