The Sedona International Film Festival is proud to present the Northern Arizona premiere of the new music documentary “Mountaintop” Nov. 1-6 at the Mary D. Fisher Theatre.

“Mountaintop” is a raw and extremely unfiltered look at the process of Neil Young and Crazy Horse making their first album in seven years.

Witness the laughter, tensions, crusty attitudes and love of a rock & roll band that’s been together for 50 years as they share their passion, first and foremost … for the music.

Two-time Rock and Roll Hall of Fame member Neil Young and Crazy Horse continue their 50 year odyssey, this time in the mountains of Colorado, and Bernard Shakey (aka Neil Young) filmed it all.

“Mountaintop” offers music lovers an unprecedented peak behind the curtain as Neil works with the band and engineers to create another musical masterpiece. Interwoven with studio footage are sublime and intimate live performances as Neil played some of the songs from his new album, “Colorado”, for the first time.

“Colorado” is Young’s first album with Crazy Horse since 2012’s “Pychedelic Pill”, and features Nils Lofgren in place of reportedly retired guitarist Frank “Poncho” Sampedro. When he announced the accompanying movie, Young said it was “a wild one, folks, no holds barred. You will see the whole process just as it went down! Warts and all! I don’t think a film about this subject with the openness and intensity we have captured has ever been seen.” 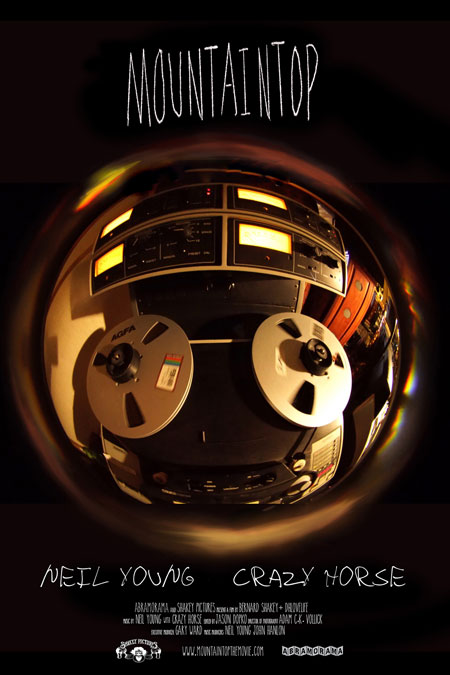