The Sedona International Film Festival is proud to present a “Festival Flashback” of the sensational British comedy “Mrs. Henderson Presents” — in honor of the film’s 15th anniversary — on Tuesday, Jan. 26 at 4 and 7 p.m. at the Mary D. Fisher Theatre.

“Mrs. Henderson Presents” was nominated for two Academy Awards, including Best Actress for Judi Dench and Best Costume Design. The film — starring Dame Judi Dench and Bob Hoskins — was a major audience hit and critical sensation when it premiered in the Sedona International Film Festival’s cinema series in 2006.

London, 1937. Mrs. Laura Henderson (Judi Dench), a woman of wealth and connections, has just buried her beloved husband. And now she’s bored. At 69, she is far too energetic and vital to fade into gentle widowhood. What she needs, says her friend Lady Conway, is a hobby. Collecting diamonds, perhaps? Or doing charitable works? But, to the shock of her friends she instead buys a theatre — the Windmill Theatre in the heart of Soho.

She knows nothing about running it, so she hires a manager: enter Vivian Van Damm (Bob Hoskins). Their love-hate relationship sparks fireworks — and historic innovations in British theatre.

Van Damm’s idea is “Revuedeville” or non-stop entertainment. It is a first, and the Windmill is packed – until other theatres copy it. Then it’s Laura’s turn to devise another first — put naked girls on stage!

But as the bombing of London begins, the government threatens to close the theatre. Mrs. Henderson’s fighting spirit is revealed — and so is the secret that drew her to the Windmill in the first place. 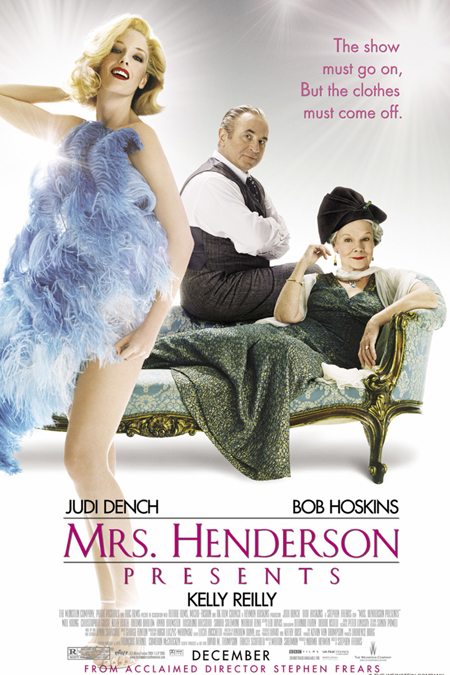