“Pain and Glory” stars Antonio Banderas and Penélope Cruz. Banderas won the Best Actor Award at the Cannes Film Festival for his role in the film. Critics and audiences are raving about the film, and there is early award’s season buzz for the film, cast and director Pedro Almodóvar.

“Pain and Glory” tells of a series of reencounters experienced by Salvador Mallo (Antonio Banderas), a film director in his physical decline. Some of them in the flesh, others remembered: his childhood in the 60s, when he emigrated with his parents to a village in Valencia in search of prosperity, the first desire, his first adult love in the Madrid of the 80s, the pain of the breakup of that love while it was still alive and intense, writing as the only therapy to forget the unforgettable, the early discovery of cinema, and the void, the infinite void created by the incapacity to keep on making films.

“Pain and Glory” talks about creation, about the difficulty of separating it from one’s own life and about the passions that give it meaning and hope. In recovering his past, Salvador finds the urgent need to recount it, and in that need he also finds his salvation.

“Ranks right up there with Almodóvar’s greatest! Haunting images that take your breath away. Antonio Banderas in the performance of his career. This is acting of the highest order, sublime in every detail.” — Peter Travers, Rolling Stone

“Almodóvar at the peak of his powers! Gorgeously crafted.” — Time Out

“It’s a gift; the kind of quiet glory worth waiting a few decades for.” — Leah Greenblatt, Entertainment Weekly

“Everything about ‘Pain and Glory’ is awake and alive.” — Stephanie Zacharek, Time 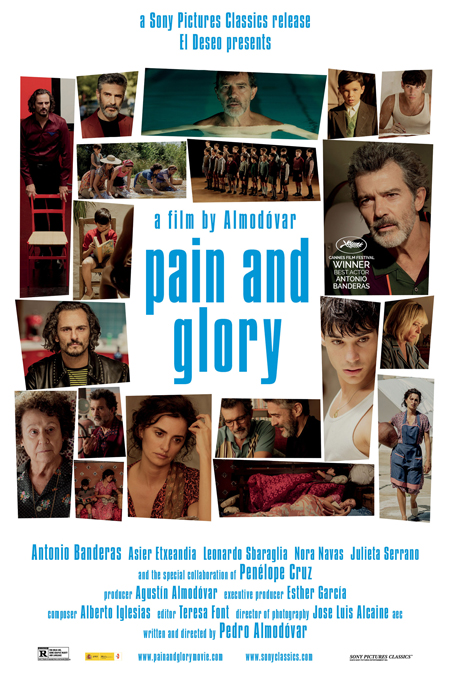