The Sedona International Film Festival is proud to present the Northern Arizona premiere of the critic and audience-acclaimed new film “Parasite” Nov. 29-Dec. 4 at the Mary D. Fisher Theatre.

“Parasite” has generated early award’s season buzz and is winning awards around the world and praise from both critics and audiences alike. It has become one of the most talked-about and best-reviewed films of the year, making nearly every major critic’s top-10 must-see film list.

“Parasite” is a family tragicomedy depicting the inevitable collision that ensues when Ki Woo, the eldest son in a family of four unemployed adults, is introduced to the wealthy Park family for a well-paid tutoring job.

Meet the Park Family: the picture of aspirational wealth. And the Kim Family, rich in street smarts but not much else. Be it chance or fate, these two houses are brought together and the Kims sense a golden opportunity. Masterminded by college-aged Ki-woo, the Kim children expediently install themselves as tutor and art therapist, to the Parks.

Soon, a symbiotic relationship forms between the two families. The Kims provide “indispensable” luxury services while the Parks obliviously bankroll their entire household. When a parasitic interloper threatens the Kims’ newfound comfort, a savage, underhanded battle for dominance breaks out, threatening to destroy the fragile ecosystem between the Kims and the Parks.

By turns darkly hilarious and heart-wrenching, “Parasite” showcases a modern master at the top of his game.

“An urgent story of class told in the most sensationally entertaining way.” — The New York Times

“One of the best films of the decade.” — Awards Circuit

“A must-see for anyone who loves cinema.” — Awards Watch 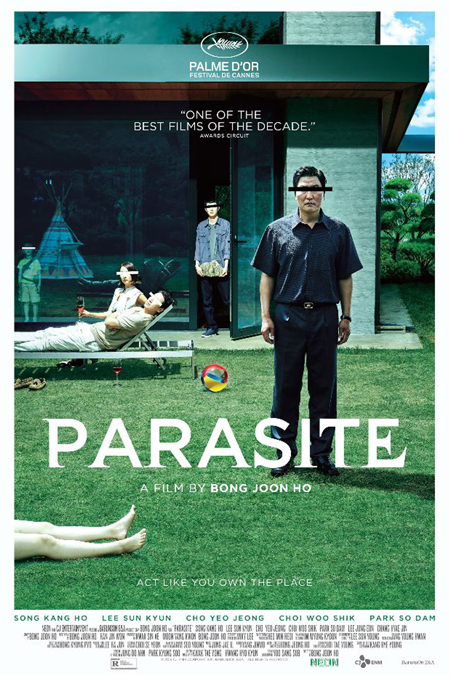