The Sedona International Film Festival is proud to present a “Festival Flashback” of the sensational Academy Award-nominated film “Philomena” on Monday, April 5 at 4 and 7 p.m. at the Mary D. Fisher Theatre.

“Philomena” is the first film in a month-long tribute to Dame Judi Dench with a special “Judi-Judi-Judi” series in April featuring a different Judi Dench film every Monday.

These two unlikely companions are on a journey to find her long lost son.

“Philomena” — based on the incredible true story — is the highly acclaimed comedy from director Stephen Frears starring Judi Dench and Steve Coogan.

When former journalist Martin Sixsmith (Coogan) is dismissed from the Labor Party in disgrace, he is at a loss as to what do. That changes when a young Irish woman approaches him about a story of her mother, Philomena Lee (Dench).

In 1952, Irish teenager Philomena became pregnant out of wedlock and was sent to a convent. When her baby, Anthony, was a toddler, the nuns took Philomena’s child away from her and put him up for adoption. For the next 50 years, she searched tirelessly for her son.

Martin arranges a magazine assignment about her search for him that eventually leads to America. Along the way, Martin and Philomena discover as much about each other as about her son’s fate. Furthermore, both find their basic beliefs challenged. 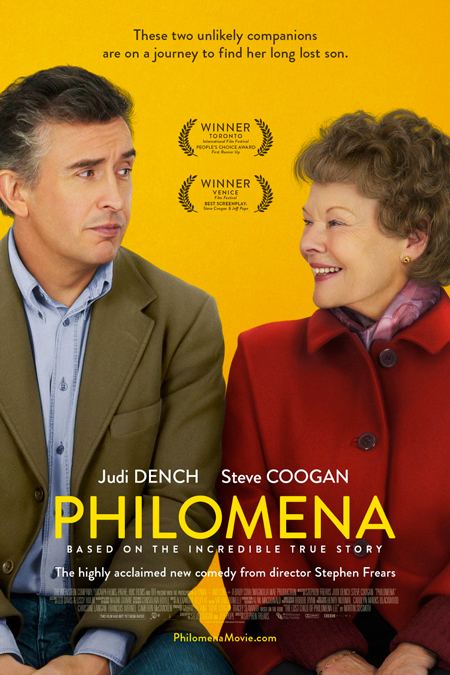