The National Theatre of London continues its new season with its acclaimed new production of “Straight Line Crazy” showing in Sedona on Sunday, Sept. 18 at 3 p.m. The Sedona International Film Festival hosts the big screen premiere at its Mary D. Fisher Theatre.

For forty uninterrupted years, Robert Moses exploited those in office through a mix of charm and intimidation. Motivated at first by a determination to improve the lives of New York City’s workers, he created parks, bridges and 627 miles of expressway to connect the people to the great outdoors.

Faced with resistance by protest groups campaigning for a very different idea of what the city should become, will the weakness of democracy be exposed in the face of his charismatic conviction?

“Ralph Fiennes is firing on all cylinders in David Hare’s new play.” – Observer

“Ralph Fiennes is magnetic.” – Time Out

“Straight Line Crazy” will be shown at the Mary D. Fisher Theatre on Sunday, Sept. 18 at 3:00 p.m. Tickets are $15, or $12.50 for Film Festival members. Tickets are available in advance at the Sedona International Film Festival office or by calling 928-282-1177 or online at the BUY TICKETS link above. Both the theatre and film festival office are located at 2030 W. Hwy. 89A, in West Sedona. 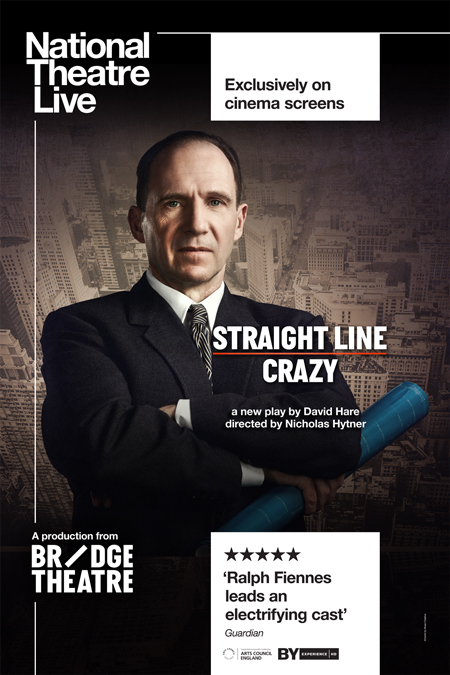