The Sedona International Film Festival is proud to present the Northern Arizona premiere of the eye-opening and award-winning new documentary “The Conservation Game” showing Sept. 11-15 at the Mary D. Fisher Theatre.

Set against the backdrop of a heated national debate on captive big cats in America, “The Conservation Game” follows the story of Tim Harrison, a retired cop who makes a bombshell discovery while undercover at an exotic animal auction.

He starts to suspect that America’s top television celebrity conservationists may be secretly connected to the exotic pet trade. What follows is a high-stakes game of cat and mouse, filled with lies, deception, and coverups.

As his investigation leads deeper into the secret world of the big cat trade, Tim and his team take their fight to the halls of Congress, pressing lawmakers to pass federal legislation that would end the private breeding and exploitation of these endangered and majestic animals. But when opposition comes from an unexpected source, Tim is forced to face the demons of his own past, while wrestling with the consequences of exposing his childhood hero.

In the United States, there are now more tigers in captivity than in their native wild habitats, and the exotic animal market is a multimillion-dollar business that thrives in the shadows of pseudo-sanctuaries, roadside zoos, and private menageries with little or no federal oversight.

At the same time, popular late-night and morning TV shows — from The Tonight Show Starring Jimmy Fallon to Good Morning America — feature special guests like endangered snow leopards and tiger cubs along with their celebrity wildlife experts to educate their audiences about endangered species and the natural world. But despite what the public is told, Tim sets out to discover where these animals actually come from and what happens to them when the cameras and studio lights turn off.

“Will bring audiences cheering to their feet!” – San Diego Reader

“Something for the ‘Tiger King’ crowd, but delivers much more bite!” – RogerEbert.com 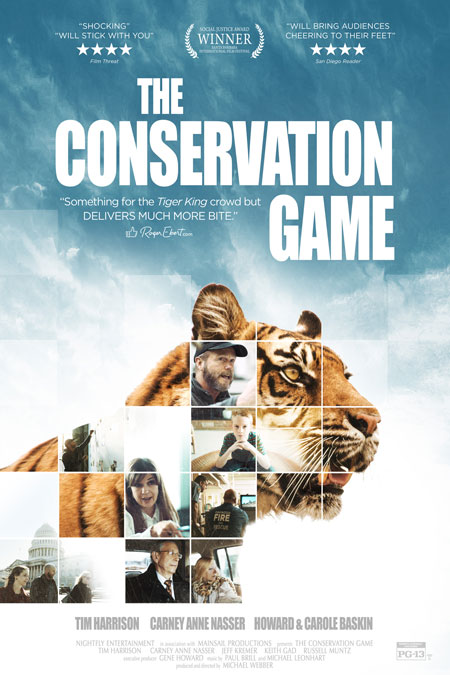