The Eyes of Tammy Faye

The Sedona International Film Festival is proud to present the Northern Arizona premiere of the acclaimed and award-winning new film “The Eyes of Tammy Faye” showing Sept. 24-Oct. 3 at the Mary D. Fisher Theatre.

“The Eyes of Tammy Faye” is an intimate look behind the extraordinary rise, fall and redemption of televangelist Tammy Faye Bakker.

In the 1970s and ‘80s, Tammy Faye and her husband, Jim Bakker, rose from humble beginnings to create the world’s largest religious broadcasting network and theme park.

Renowned for her message of love, acceptance and prosperity, Tammy Faye became inseparable from her indelible eyelashes, her idiosyncratic singing, and her eagerness to embrace people from all walks of life. However, it wasn’t long before financial improprieties, scheming rivals, and scandal toppled their carefully constructed empire.

“The Eyes of Tammy Faye” features an all-star cast, including Jessica Chastain in the title role with Andrew Garfield playing her televangelist husband Jim Bakker.

Over thirty years ago, it seemed just about everyone had an opinion about Tammy Faye Bakker, when in reality, no one really knew the woman behind the television personality. As a child of the 80s, producer and star Jessica Chastain first became aware of Jim and Tammy Faye when their empire crashed and burned to the ground, all before a national televised audience. Instantly recognizable with her iconic makeup and larger-than-life personality, Tammy Faye’s face was plastered across every tabloid in the grocery checkout line.

Years later, after watching Fenton Bailey’s and Randy Barbato’s acclaimed documentary of the same name, “The Eyes of Tammy Faye (2000), Chastain was surprised to learn that Tammy Faye was more than just a magazine headline: Bakker had genuine integrity and faith, and she saw how misogyny and tabloid culture played a significant role in her very public humiliation.

“The documentary was a glimpse behind the curtain,” says Chastain. “We could see her without all the societal judgment. She was just so filled with love. Her story was rich and complex, and it played out over three decades.” 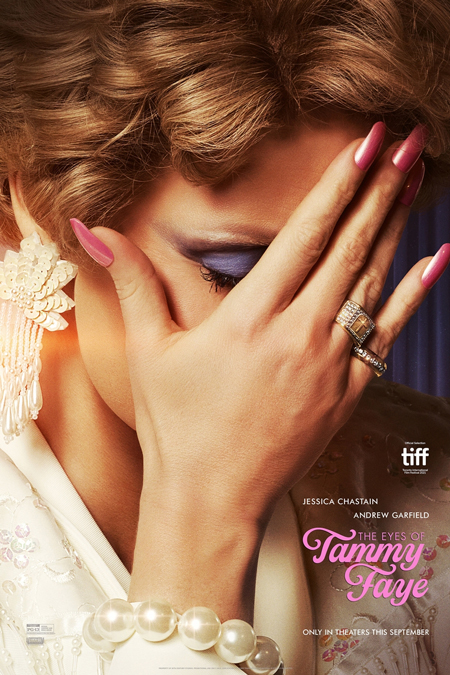