The Sedona International Film Festival is proud to present a special Veterans Day encore of the award-winning film “The Messenger” showing one day only, Wednesday, Nov. 11 at 4 and 7 p.m. at the Mary D. Fisher Theatre.

“The Messenger” was nominated for two Academy Awards, including Best Supporting Actor for Woody Harrelson and Best Original Screenplay for Alessandro Camon and Oren Moverman. The Sedona International Film Festival premiered the film originally when it was released in theaters.

“The Messenger” is a powerful and tender story about a returned war hero making his first steps toward a normal life.

In his first leading role, Foster stars as Will Montgomery, a U.S. Army officer who has just returned home from a tour in Iraq and is assigned to the Army’s Casualty Notification service. Partnered with fellow officer Tony Stone (Harrelson) to bear the bad news to the loved ones of fallen soldiers, Will faces the challenge of completing his mission while seeking to find comfort and healing back on the home front.

When he finds himself drawn to Olivia (Morton), to whom he has just delivered the news of her husband’s death, Will’s emotional detachment begins to dissolve and the film reveals itself as a surprising, humorous, moving and very human portrait of grief, friendship and survival.

Featuring tour-de-force performances from Foster, Harrelson and Morton, and a brilliant directorial debut by Moverman, “The Messenger” brings us into the inner lives of these outwardly steely heroes to reveal their fragility with compassion and dignity.

“One of the decade’s most beautifully acted films!” — Stephen Holden, New York Times 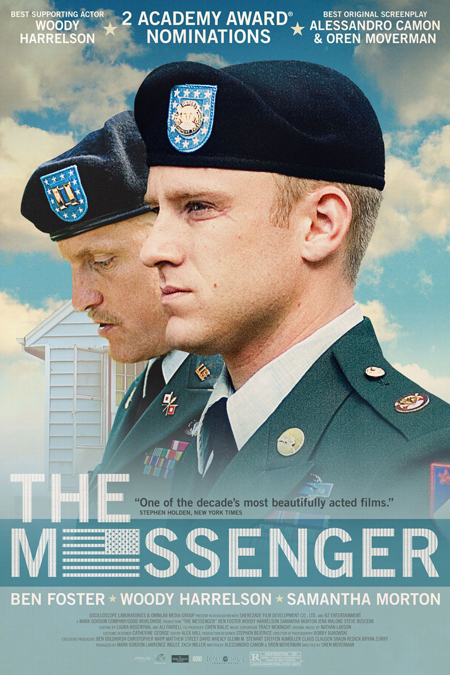