The Sedona International Film Festival is proud to present the Sedona return and encore of the award-winning “The Serengeti Rules” on Wednesday, July 31 at the Mary D. Fisher Theatre. There will be two shows at 4 and 7 p.m. that day.

“The Serengeti Rules” debuted to sold out shows and rave audience reviews at the recent Sedona International Film Festival — where it won the Audience Choice Award for Best Environmental Film — and is returning to Sedona by popular demand.

Exploring some of the most remote and spectacular places on Earth, five pioneering scientists make surprising discoveries that flip our understanding of nature on its head, and offer new hope for restoring our world.

Academy Award-winning Passion Pictures and HHMI Tangled Bank Studios present one of the most important, but untold science stories of our time — a tale with profound implications for the fate of life on our planet.

Beginning in the 1960s, a small band of young scientists headed out into the wilderness, driven by an insatiable curiosity about how nature works. Immersed in some of the most remote and spectacular places on Earth — from the majestic Serengeti to the Amazon jungle; from the Arctic Ocean to Pacific tide pools — they discovered a single set of rules that govern all life.

Now in the twilight of their eminent careers, these five unsung heroes of modern ecology — Bob Paine, Jim Estes, Mary Power, Tony Sinclair, and John Terborgh — share the stories of their adventures, and how their pioneering work flipped our view of nature on its head. Across the globe, they discovered that among the millions of species on our planet, some are far more important than others. They called these species “keystones,” because they hold the natural world together.

The role of keystones is both revelatory and surprising: sea otters help kelp forests flourish, supporting everything from salmon to eagles; wolves enable rivers to run clear and help forests thrive; and the humble wildebeest controls the numbers of trees, butterflies, elephants, and even giraffes on the savanna. Unfortunately, these deep connections also work in reverse. When keystones are removed, ecosystems unravel and collapse—a phenomenon no one had imagined—or understood until their revolutionary discoveries.

With new knowledge also comes new hope, and these same visionaries reveal the remarkable resilience of nature—and how the rules they discovered can be used to upgrade and restore the natural world. They give us the chance to reimagine the world as it could and should be.

Based on the book by Sean B. Carroll, “The Serengeti Rules” will forever change the way we see nature. 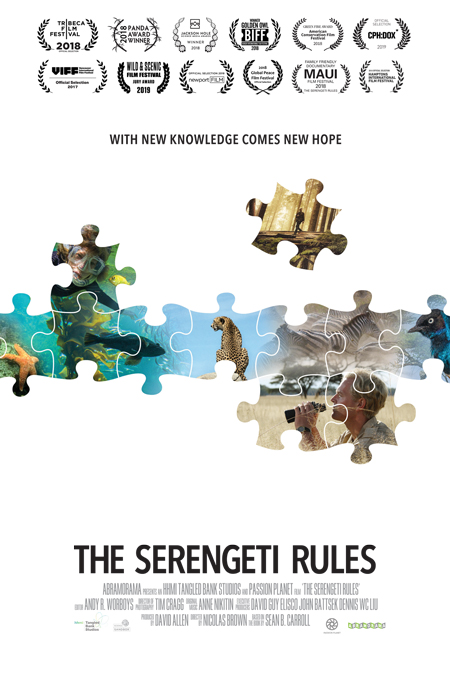