The Sedona International Film Festival is proud to present the Northern Arizona premiere of the fascinating and moving true story “Three Christs” Jan. 17-22 at the Mary D. Fisher Theatre.

In 1959, psychiatrist Dr. Alan Stone (Richard Gere) arrives at a mental hospital in Ypsilanti, Michigan armed with the radical belief that schizophrenic patients should be treated not with confinement and electroshock therapy but with empathy and understanding.

As his first study, he takes on the particularly challenging case of three men — Joseph (Peter Dinklage), Leon (Walton Goggins), and Clyde (Bradley Whitford) — each of whom believes they are Jesus Christ. Hoping that by getting them together in the same room to confront their delusions he can break through to them, Dr. Stone begins a risky, unprecedented experiment that will push the boundaries of psychiatric medicine and leave everyone involved — including Dr. Stone himself — profoundly changed.

Based on a remarkable true story, “Three Christs” is a fascinating and moving look at one man’s journey into the deepest mysteries of the human mind.

Director Jon Avnet, whose work has been nominated for Golden Globes, Emmys, Oscars, brings “Three Christs” to life directly from primary source materials: Dr. Milton Rokeach’s provocative book, “The Three Christs of Ypsilanti” and the actual transcripts themselves. Avnet adapted the book with Eric Nazarian. The result is a descent into a universe of madness, where logic is absent, words misleading, and behavior bizarre. Yet it is also a world of wonder, joy and intimacy. The film asks the fundamental questions about identity: Who are you? 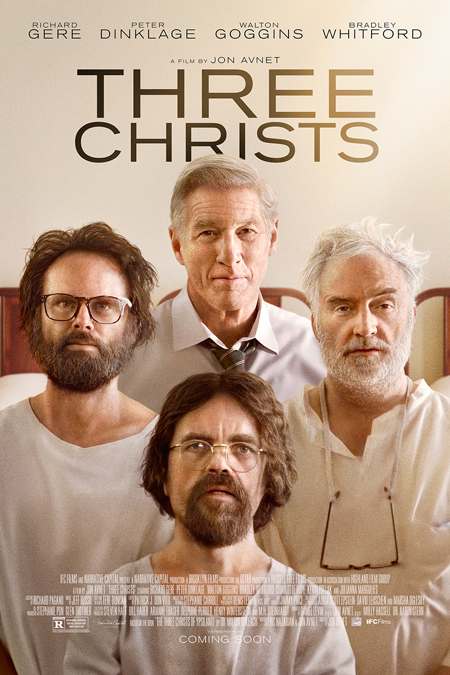