The Sedona International Film Festival is proud to partner with the Grand Canyon Wolf Recovery Project to present the Wild & Scenic Film Festival 2020 on Saturday, April 4 at the Mary D. Fisher Theatre in West Sedona. There will be two screenings of the program at 4 p.m. and 7 p.m. that day.

Featured films including in the Wild & Scenic Film Festival 2020 are:

Sniper (13 min)
In New Zealand, Yellow-eyed Penguin numbers have dwindled. Finding these penguins in the dense bush to monitor and conserve the population is tricky. But former ranger Leith Thomson has a way – Sniper. She is one of the 80 certified Conservation Dogs in New Zealand. Now every penguin counts and Sniper is on an adventure to protect these critically endangered birds.

The Guardian Elephant Warriors of Reteti (4 min)
Reteti Elephant Sanctuary is the first ever community-owned and run elephant sanctuary in Africa. This oasis where orphans grow up, learning to be wild so that one day they can rejoin their herds, is as much about the people as it is about elephants. It’s a powerful story about the changing relationship between people and the animals they are protecting.

Iniskim (9 min)
Shot on the real-life Blackfeet buffalo drive and inspired by a true story, ‘Iniskim’ follows a young girl’s journey from trauma to recovery. By reconnecting with the ancient power of the buffalo, the timeless landscape of her ancestors, and the wisdom of her culture, her life is changed forever.

The New Environmentalist: The Verge of Extinction (5 min)
Macedonian Activists and Scientists work together with their community to prevent the construction of two major dams planned to be built within a national park that could destroy the habitat of the critically endangered Balkan lynx. Narrated by Robert Redford, ‘The New Environmentalists’ illustrates how ordinary people are effecting extraordinary change.

Pebble Redux: The Bears of Amakdedori (14 min)
If you thought the original Pebble Mine proposal was a bad idea for salmon in Bristol Bay, you’ll despise Pebble Redux even more! This film shows the Trump fast-tracked, expanded mine proposal through the eyes of its newest, cutest threatened species representative – a four-year-old grizzly bear. Check out the views this young grizzly enjoys while he plays and snacks in the densest grizzly bear habitat in the world and learn how you can help stop this proposal – again!

From Darkness to Light (13 min)
Life is challenging for women in Zanzibar, a semi-autonomous region of Tanzania made up of numerous islands where half the population lives below the poverty line. Mothers and grandmothers in Zanzibar are becoming solar engineers thanks to training from Barefoot College – meaning they can bring electricity to their villages where previously they relied on paraffin.

Nature Now (4 min)
Made with no flights, recycled footage, and zero net carbon. Given away for free. Viewed 53 million times, played to the United Nations. This film is a personal and passionate call to arms from Greta Thunberg and George Monbiot to use nature to heal our broken climate.

Every Nine Minutes (4 min)
Every nine minutes, the weight of a blue whale (300,000 pounds) in plastic makes its way into our ocean. To call attention to this, the Monterey Bay Aquarium built a life-sized replica of a blue whale made of single-use, locally sourced plastic trash. Certified by Guinness World Records, the whale is the largest sculpture of its kind ever built.

Daniel: A Cyclist with TBI Making a Difference (5 min)
Every day (and, we mean every day) you can see Daniel riding his bike along Highway 50. And, while he’s out there, he’s picking up trash and doing his part to make the Lake Tahoe area better for everyone. That is an amazing story in and of itself. But it is even more incredible when you learn that Daniel nearly died as a child from a fall and was in a coma for 8 months, and although he still suffers from traumatic brain injury (TBI), that hasn’t stopped him from making a difference.

(RE)Connecting Wild (12 min)
This is the remarkable story of the decade-long effort by the Nevada Department of Transportation (NDOT) and its partners to improve human safety by re-connecting a historic mule deer migration that crosses over both US-93 and I-80 in rural Elko County, Nevada. Witness the wildlife crossing structures along I-80 from construction to the restoration of safe passage for migratory mule deer to more than 1.5 million acres of summer and winter habitat.

Where Life Begins (10 min)
Along the Arctic Coast, at the northmost point on American soil, we explore the inseparable bond between mother and child, the sacred and fragile moments after birth, and the importance of protecting the place Where Life Begins.

Nigerians Fight to Protect the World’s Most Trafficked Mammal (10 min)
Pangolins are believed to be the most trafficked mammals in the world. As the four Asian species of pangolins have dwindled, poachers are increasingly turning to the African species to supply the trade. In this short film, meet the bold Nigerians who are fighting to protect this gentle and vulnerable creature.

The New Environmentalist: Ghosts of the Mountains (7 min)
Bayarjargal Agvaantseren helped create the 1.8 million-acre Tost Tosonbumba Nature Reserve in Mongolia’s South Gobi Desert—a critical habitat for the vulnerable snow leopard. Then she succeeded in persuading the Mongolian government to cancel all 37 mining licenses within the reserve. An unprecedented victory for the snow leopard, as of June 2018 there are no active mines within the reserve—and all mining operations are illegal. For her activism, Bayara was recognized with the 2019 Goldman Environmental Prize for Asia.

A Walk Through the Land of A Thousand Hills (11 min)
Claver Ntoyinkima, a native park ranger, shares the secrets of Nyungwe National Park in Rwanda as he guides us through the forest. With almost 300 bird species, over 1,000 plant species, and dozens of large and small mammals, Nyungwe is one of the most biodiverse places in the world. Twenty-five years after the devastation of the Rwandan Civil War, the park is now one of the best-conserved montane rainforests in Central Africa. As Claver walks through the forest we uncover the origins of his conservation values and the history of an ecosystem that survived one of Rwanda’s darkest periods.

CLICK HERE to see individual photos and trailers for all featured films.

The Wild & Scenic Film Festival is co-presented and co-sponsored by the Grand Canyon Wolf Recovery Project and the Sedona International Film Festival.

The Wild & Scenic Film Festival will be shown at the Mary D. Fisher Theatre one day only: Saturday, April 4 at 4 and 7 p.m. Tickets are $15 general admission, or $12.50 for Film Festival members and students. For tickets and more information, please call 928-282-1177. Both the theatre and film festival office are located at 2030 W. Hwy. 89A, in West Sedona. 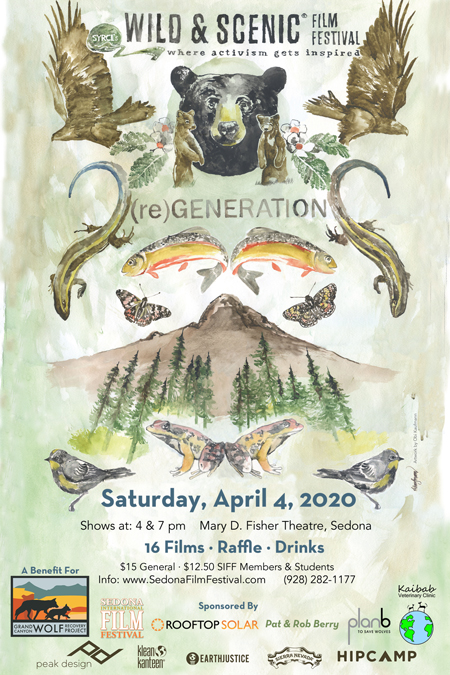